The attic. Once filled with a lot of rubbish. Then cleaned out and filled again. Our rubbish this time. And now it was time to clean it out for good.

After getting the concrete in place, the most logical step would have been to continue on that until the floor was ready. But we’re not logical. You might have guessed by now, but now it’s official.

We are not logical.

We decided to go for the roof as our next big project, even while the floor and everything following it wasn’t ready yet. Being crazy doesn’t hurt, it only tickles. Sometimes.

Before we could embark on the journey towards a new roof, we had a lot of work to do getting the attic ready. It needed to be completely empty.

The first part wasn’t that hard. Pick up a box filled with all kinds of stuff, carry it down one floor and put it down in another room. After a few boxes that other room needed a little reorganization, if we wanted to be able to get all the boxes in it (besides what was already there). Then we carried all boxes containing kitchen stuff down another floor.

The end result? Boxes all over the house, except in the attic or where there was only concrete as a floor.

Then we could start demolishing all the fake walls that had been put up. In the Dark Ages someone decided to create a bedroom there, with walls made out of chipboard on a wooden frame. They also decided they didn’t want any slope from the roof being visible, or any of the chimneys for that matter. We have a completely different layout in mind for that floor, so everything needed to go anyway.

And then the demolition began.

Chrisje really really really wanted to give the wall hiding the roof the first blow. It had already taken me quite some effort keeping her from doing that while the room wasn’t empty yet, so now there was no holding back any more. She needed to know if there was a body present in our little cave.

With that craving satisfied, I started taking down the ceiling first. The frame of the ceiling was nailed to the walls, so it had to be removed first anyway.

Everything had been nailed in place, so I needed to cut every beam running across with my saw. Out they went. 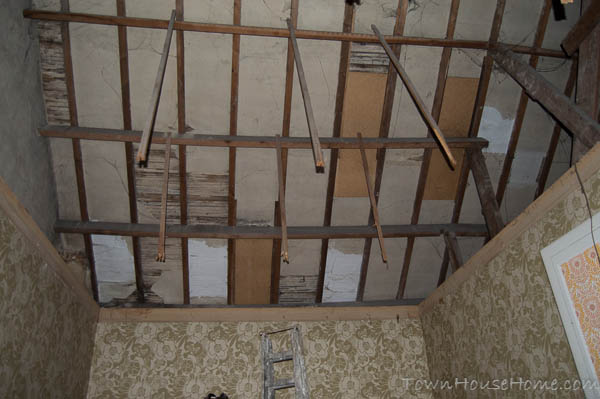 Then we could tear down the walls. Even more chipboard, joy! There were three walls forming the room, another three forming a little hall, and one more separating two smaller chambers. You know what this means, right? Maximum chipboard fun!

First the bedroom got stripped.

Then the little hall.

Fun fact: the little window you could see in some photos we donated to Chrisje’s theater company. They used it in the set of their production for 2014, talk about recycling!

After some hard work we ended with an empty attic, ready for our roof guy to start his work. An empty attic also means a lot of wood downstairs…

You never know what it might come in handy for. All your crazy ideas are welcome in the comments!