What good would this site be if we didn’t at least show you the layout of our house? Not much, I can tell you that! So here it is, the one and only virtual tour of the house as it was when we first saw it.

We start our tour at the ground floor. First we’ll show you a little plan of how it looks like, made in floorplanner. Never mind all the stuff placed inside, Chrisje already had some fun with it ;).

We enter the house in what once was a garage, although we never intended to use it as such. This is our only entrance, so it would be a hassle to always have to walk around a car. Also, it’s 2m60 to 2m70 wide at most, which is quite small to park in and still be able to enter or exit the car. As such we decided quite fast to have the “garage” function as a rather large entrance, which also gave us the option of creating a toilet on the groundfloor inside the house (we’ll get back on that later).

From the entrance we go left, pass the stairs to the first floor, and enter the living room. One of the features we really liked about this when we first visited this house was the floor and the windowsills, which both are in travertine. This is a floor we really wanted to keep! 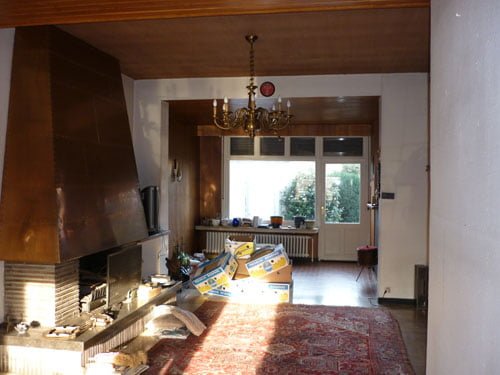 Onwards we go, into the kitchen. This will receive an island in the middle of the space, and will be Chrisje’s sanctuary.

From the kitchen we can go two ways (if not going outside into the garden): back to the stairway or down to the cellar. Nothing special there, but I do find it a very interesting feature of our house, for the beer and wine collection 🙂

And then the final room on the ground floor, to be reached from the entrance again, is the storage room. This one will house the heating boiler, laundry, and a lot of our provision. With all the booze going in the cellar, we’ll have to house those someplace, right? 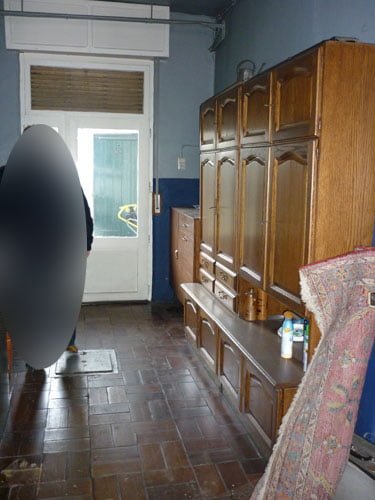 Then we go up the stairs, to the first floor. Again, a litle plan to give you an idea of how it looks like first.

The first room on our left is the bathroom. As you can see, we had a bath, a toilet and a single sink.

Then we have the first bedroom. We believe this was the main bedroom for the previous owners, but in our heads this will become Koen’s mancave 🙂

Next up is another bedroom, which will become the master bedroom for us.

And then the final room on this floor, yet another bedroom (hope you’re not bored to death yet). This will become Chrisje’s place or baby room once it’s finished.

Then we go up another floor. Just a quick show around, as the previous owners put up some chipboard walls to create a bedroom and storage. This is going to be removed completely and we’ll start completely from scratch to create an entire floor for the future kids, yay! And on top of that (both figurally and literally), we’ll still have room for a storage attic.

There you have it, our house. But wait, there’s more! There’s a garden too! Just some quick shots around, to give you an idea. Those are some things for the future, after all the work in the house is done 🙂

Those blurbs you’ve seen every now and then aren’t things we don’t want you to see, there’s a person behind the blur and since we don’t want to get into any kind of legal trouble I’ve decided to blur them out. Better be safe than sorry, right?