After all the research from last week’s roundup, we knew what we wanted in our fireplace. We found a contractor worthy of our trust, went over all the details of what we did or did not want, and off went our order to be produced!

First of all, let me tell you our choice. We opted for a soapstone fireplace: if sized properly, it’ll heat our entire living room, dining room and kitchen a whole day while only needing fire for around 3 hours. That might still seem like a lot, but compared to other systems you still get heat when you’re not keeping the fire burning.

There are mainly two companies that produce high quality massive soapstone fireplaces: Tulikivi and Nunnauuni, with the latter being the smallest of the two. We went through both their catalogs to see what their offerings are and what would fit our vision. We chose Nunnauuni as they had a proposal closest to it. Once you picked the producer, you need an installer, which in our case was the contractor I just spoke about, Radialis.

First they delivered the stones… 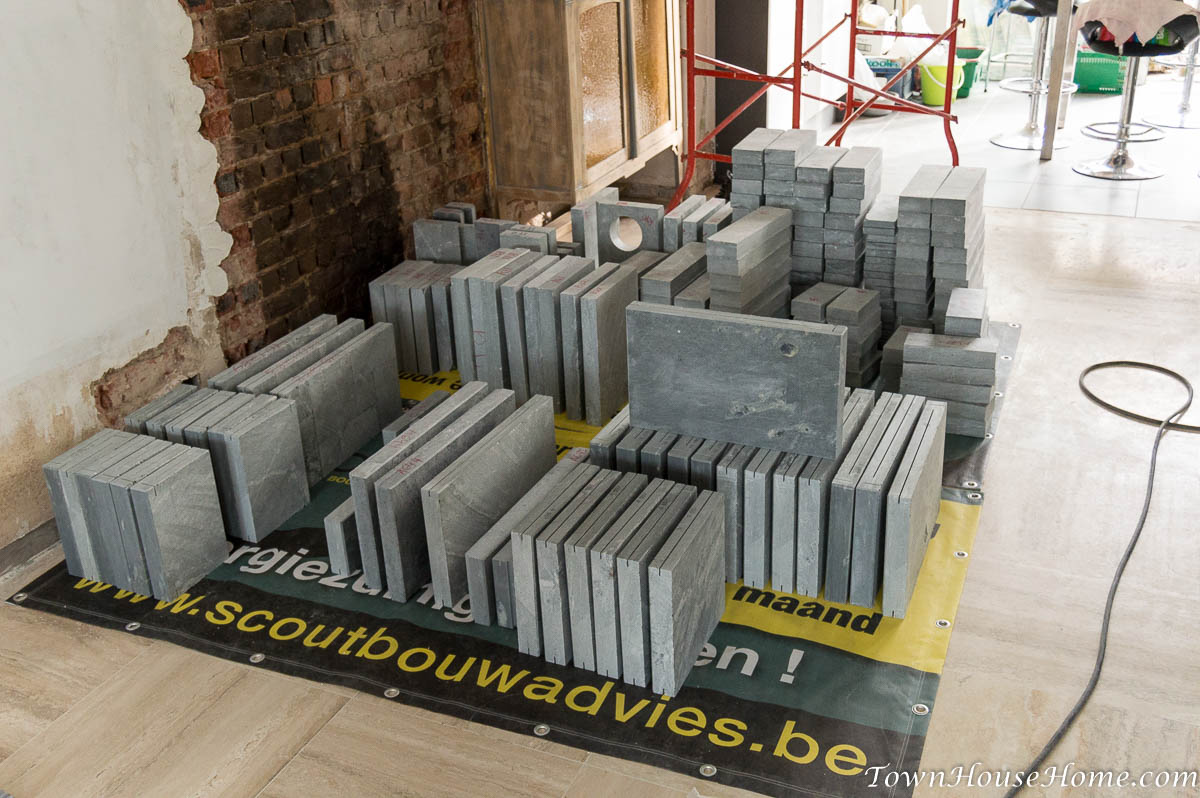 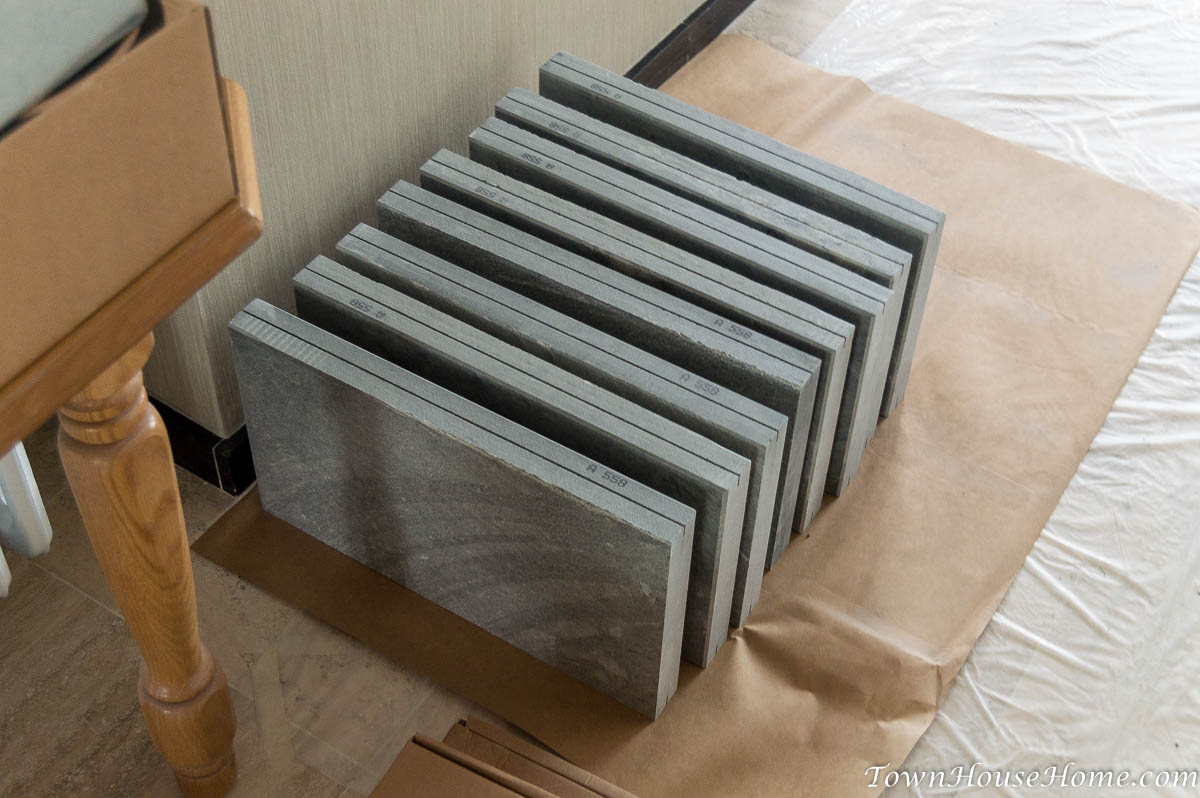 The next day the construction could start. First a hole through the floor was drilled, for the external air supply. Lucky for us we have a basement underneath the location we wanted our fireplace to be. With that done the base plate (well, actually all three pieces of them) were put in place… 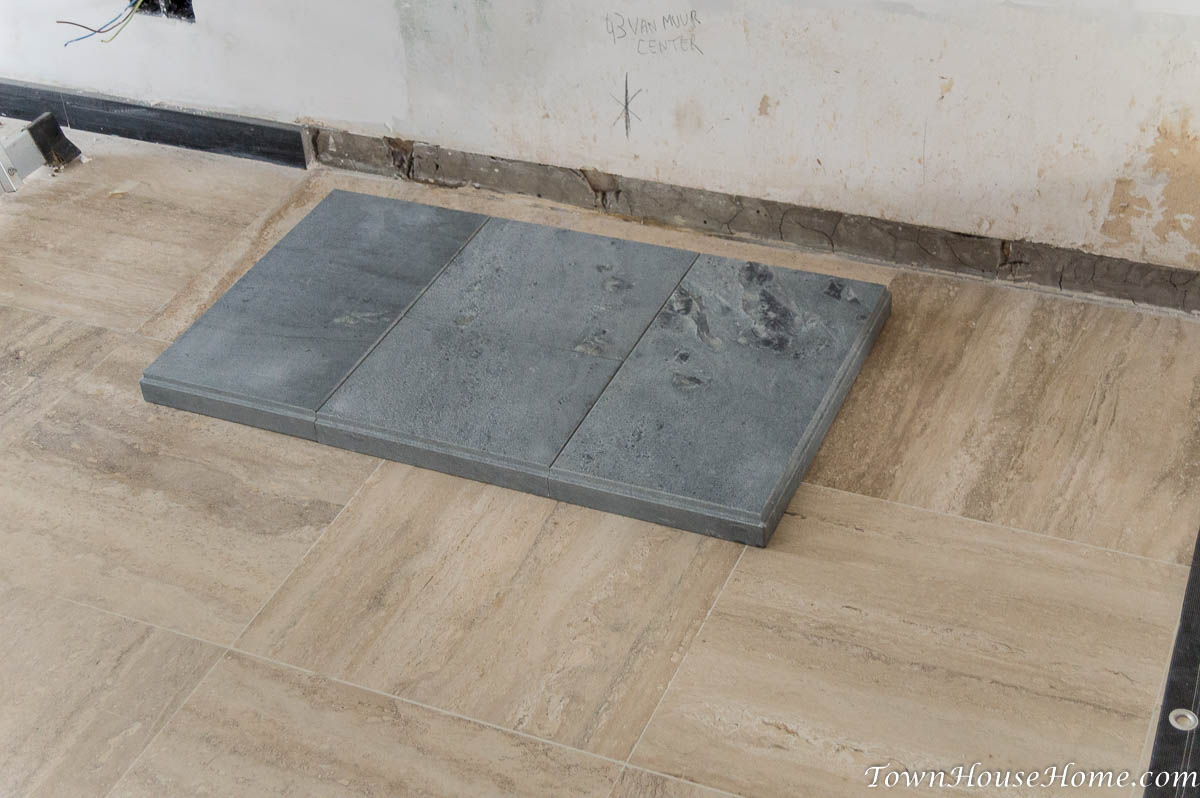 … the hole marked down properly and the first layer of stones put into place. 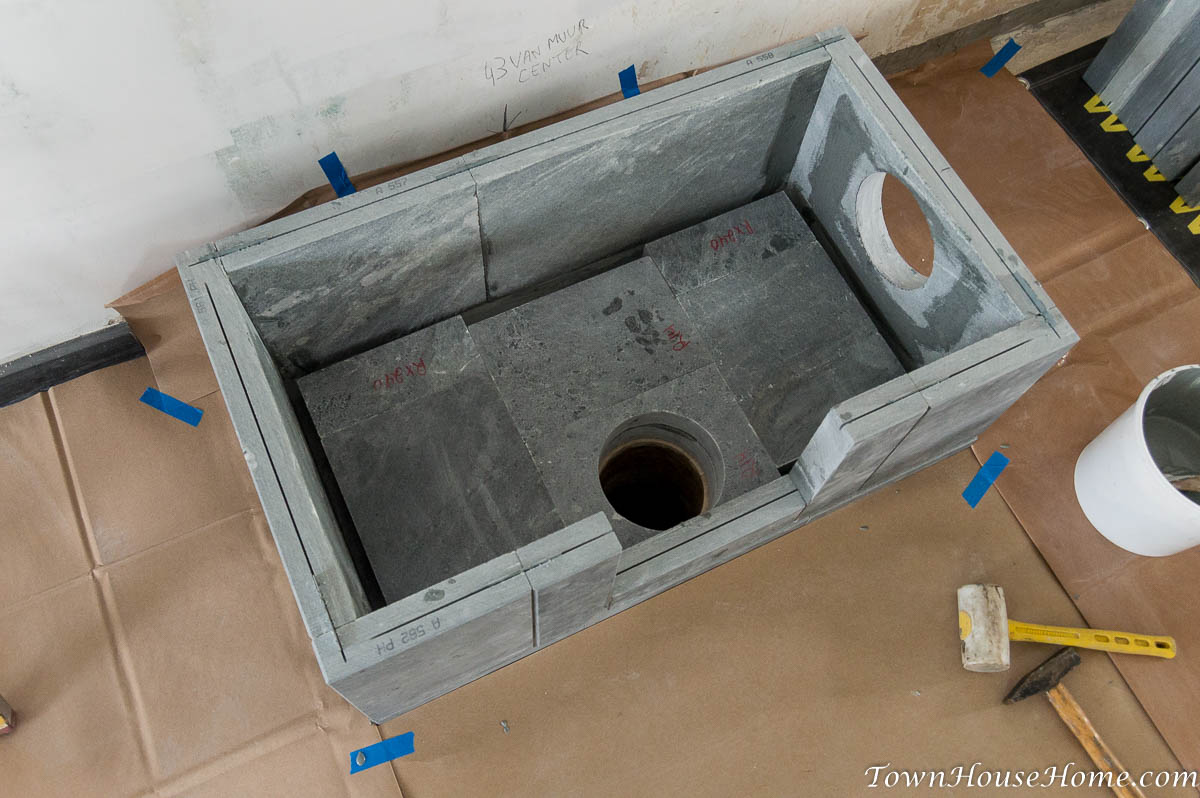 This part is crucial: start off wrong and the complete construction will have that mistake. After that it is for most of it a matter of putting layer after layer of the stones. Think of it as a large Lego system, with a different interlocking system: there’s a groove in each stone, enabling a metal insert to be put in, keeping two stones in the same layer and the one above together. If you look closely at the corners of the fireplace in the photo above, you might be able to see it.

With the outside of the first layer in place, the inside still needed to be filled. 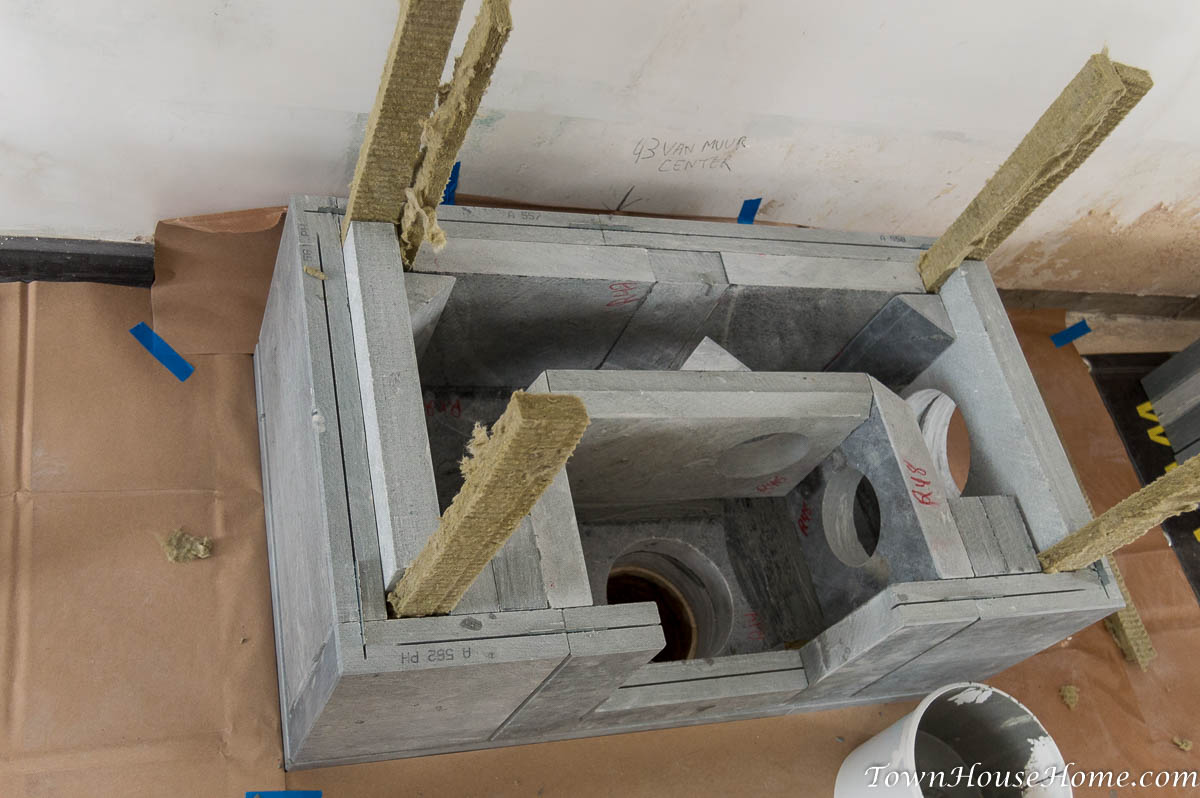 What you see is the vent to the chimney. As our fireplace is located next to our chimney (opposed to in front of it), the exit is the big hole on the complete right (the smaller ones are for cleaning purposes). In a soapstone stove like ours the combusted gases go up in a central vent, that splits up at the top into two vents that come down, one at each side. Back at the bottom these two vents are joined again in a U-like shape to then exit the fireplace (to the right in our case). The green pieces are insulation.

The first layer now complete, it is but putting stone after stone on top of each other. 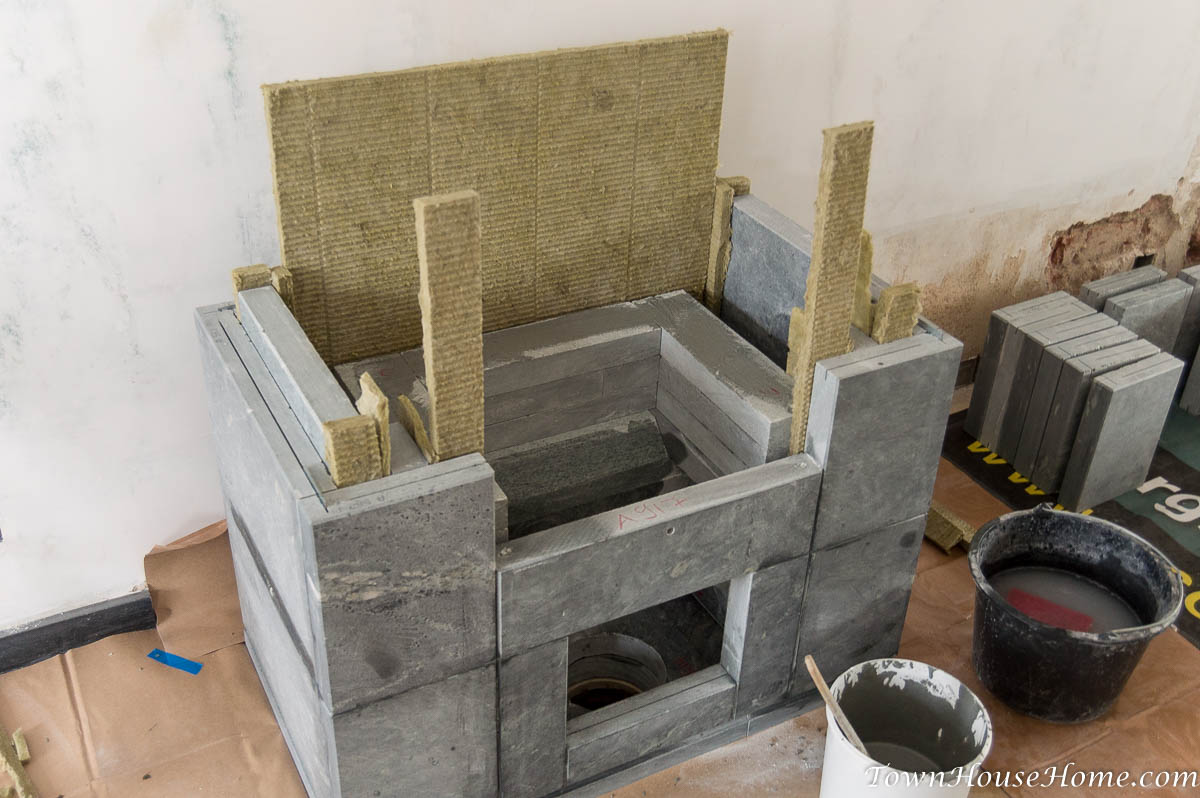 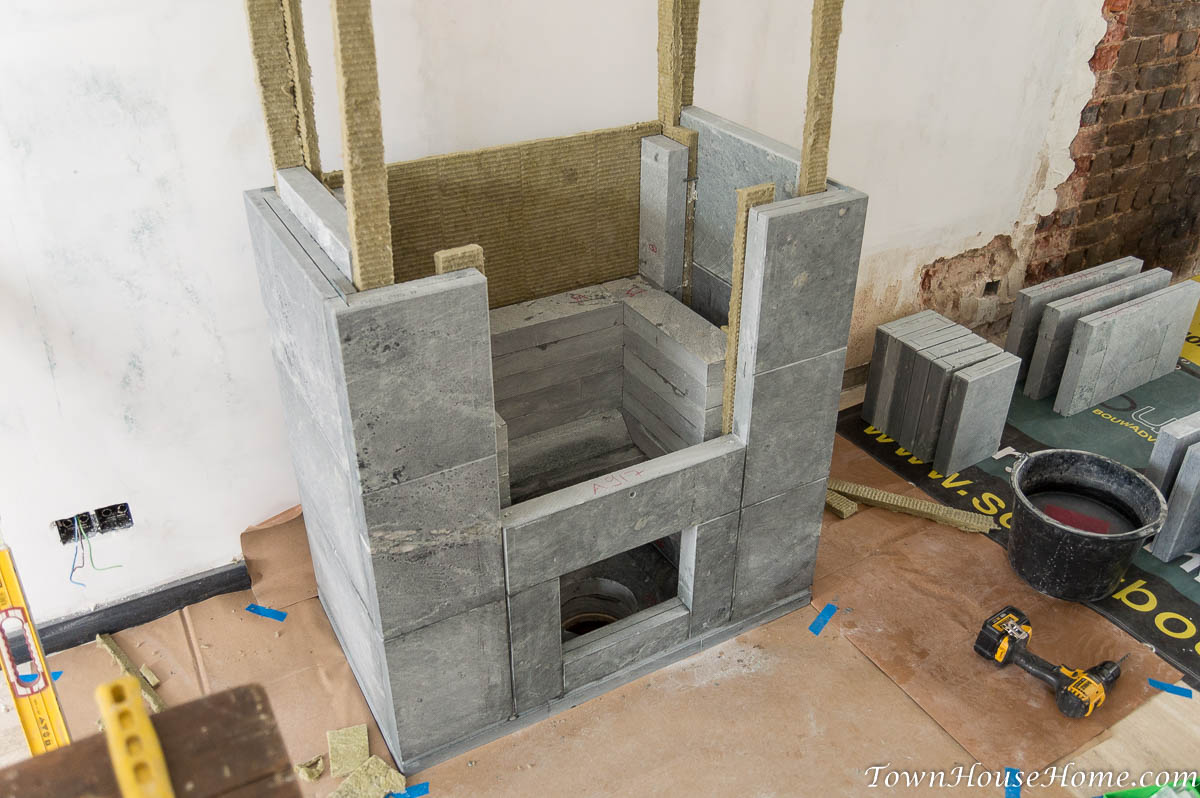 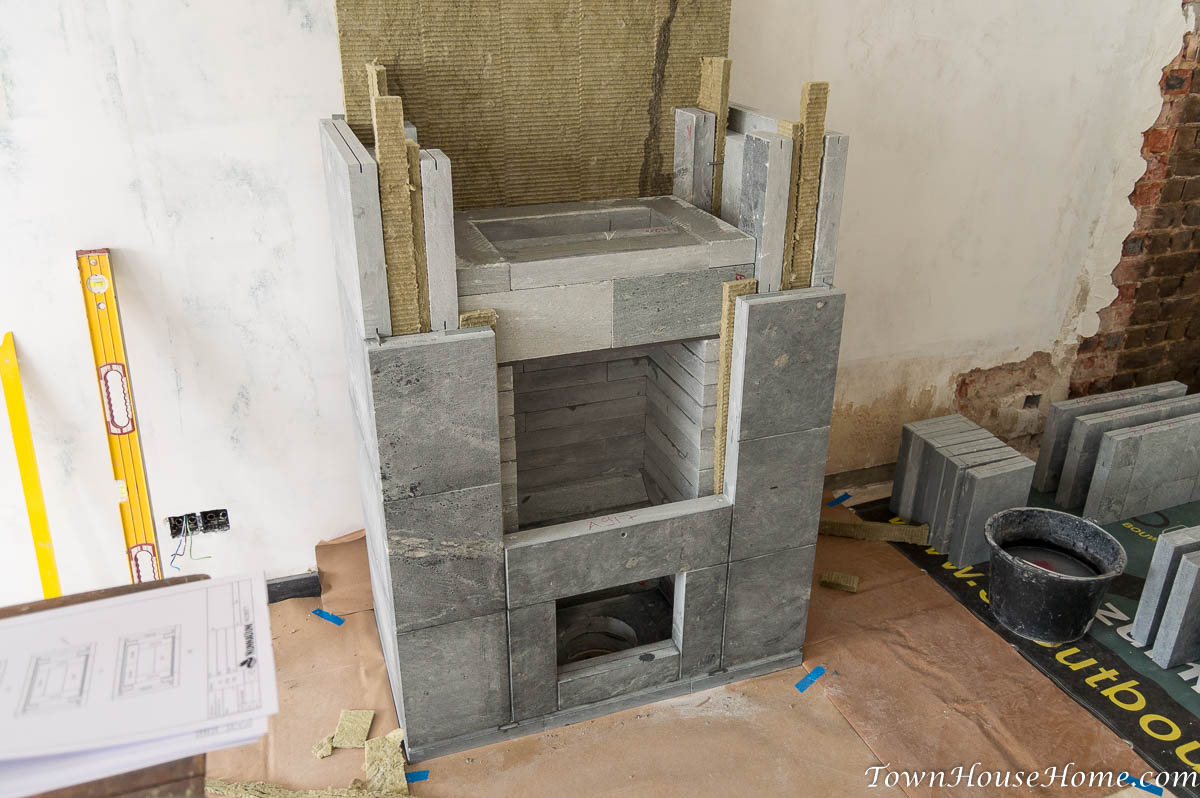 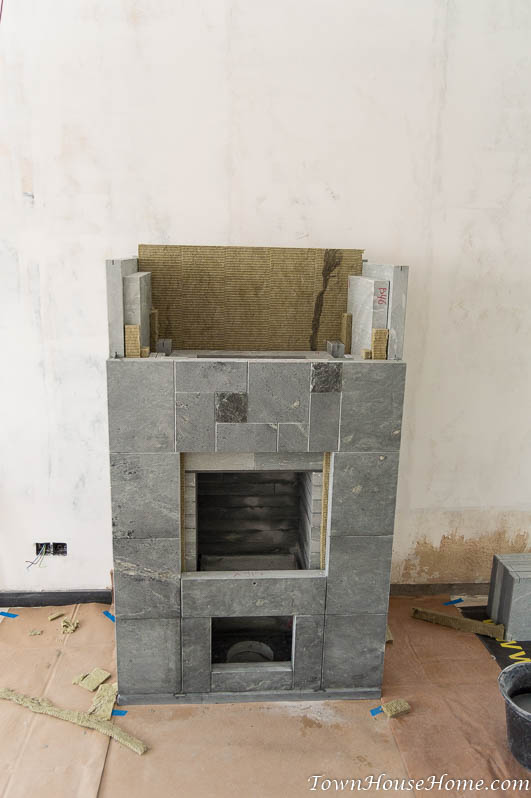 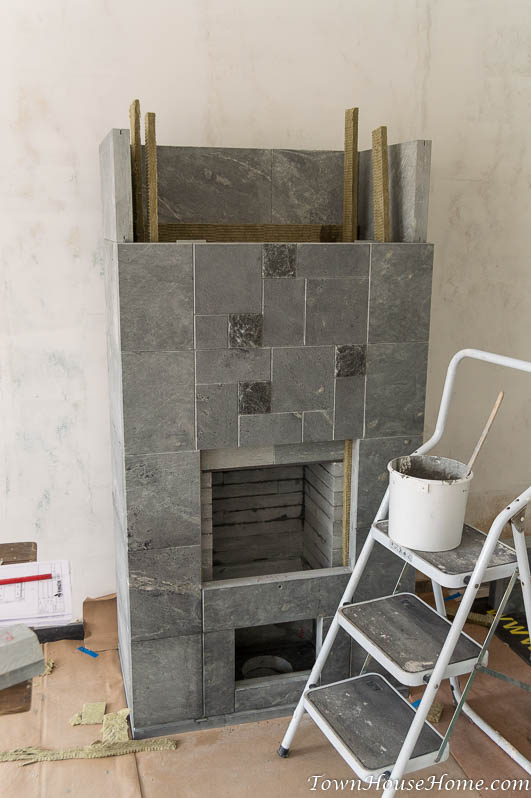 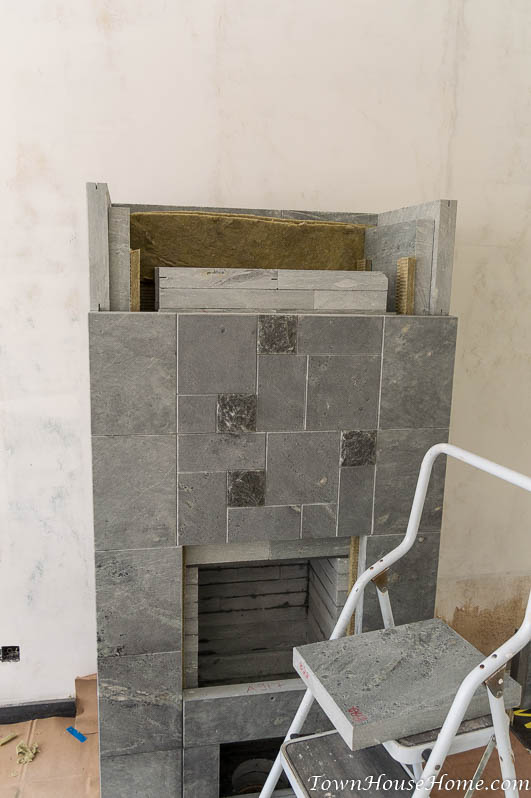 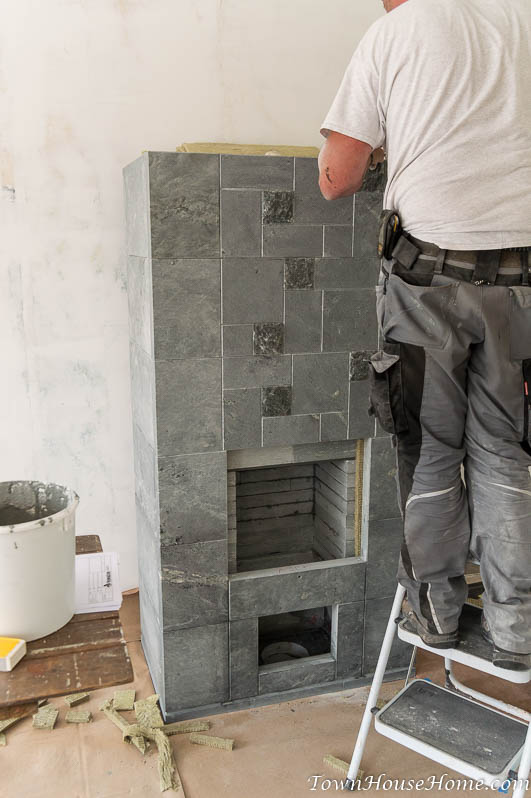 Once the construction was complete the door and ash tray could be installed. After that, the chimney still had to be constructed. It all started at the fireplace with an insulated pipe going horizontal for 1,5 meter, then going up all the way to the attic and through the roof. After that the space between the fireplace and the vertical pipe got measured, so that our final wish could be made and installed.

Four more stones were machined to specification, and then our little bench could be installed. First the stones in front… 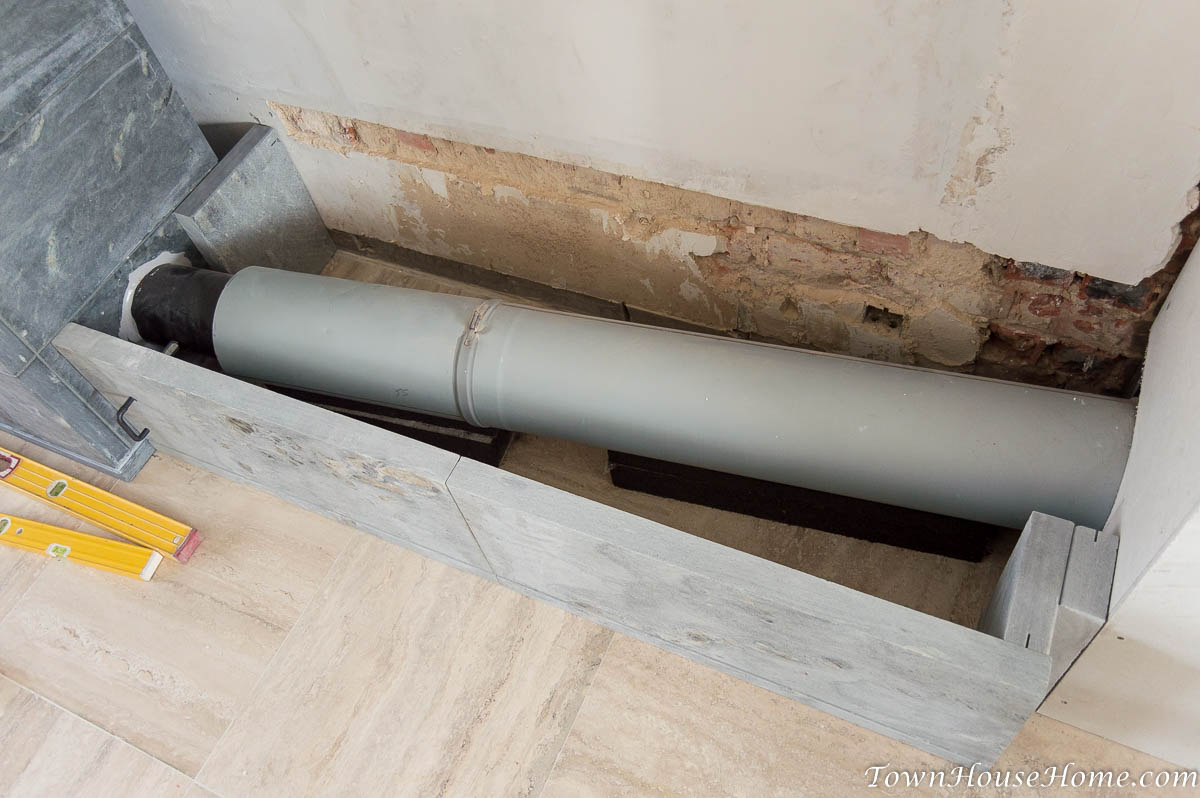 … then some bricks at the back to support the deck stones… 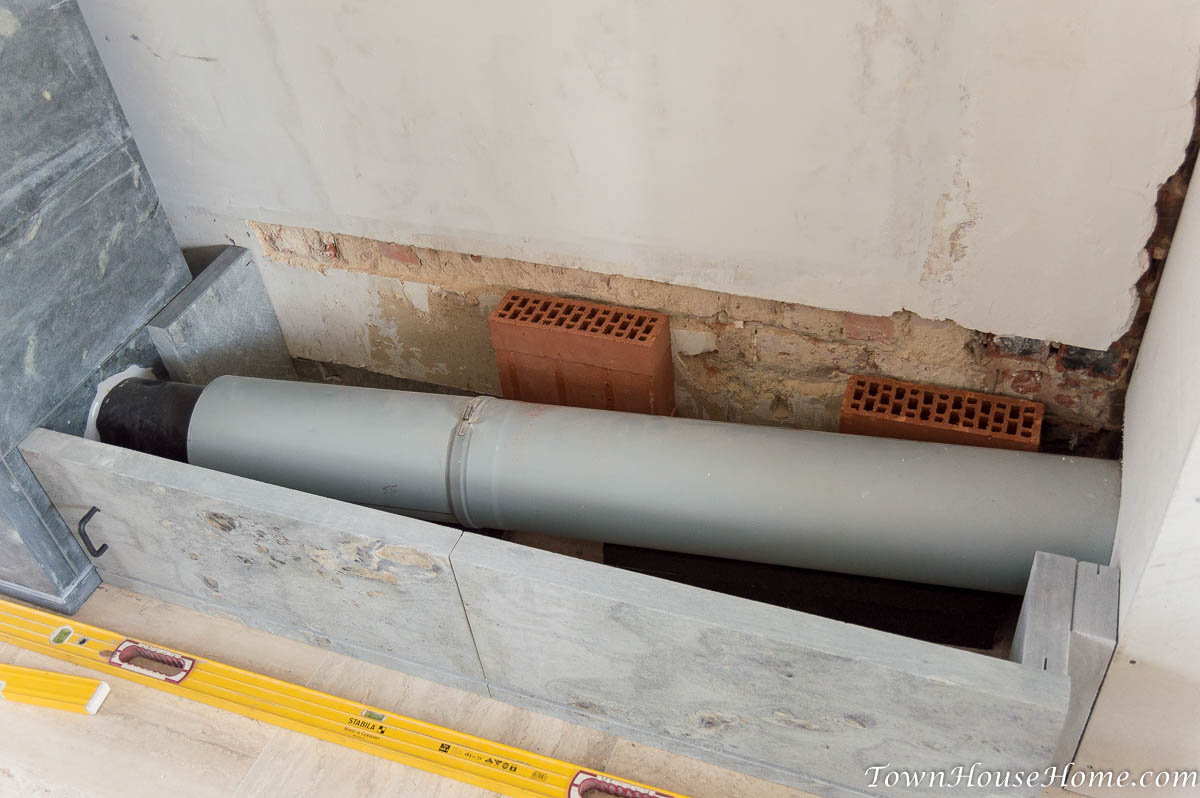 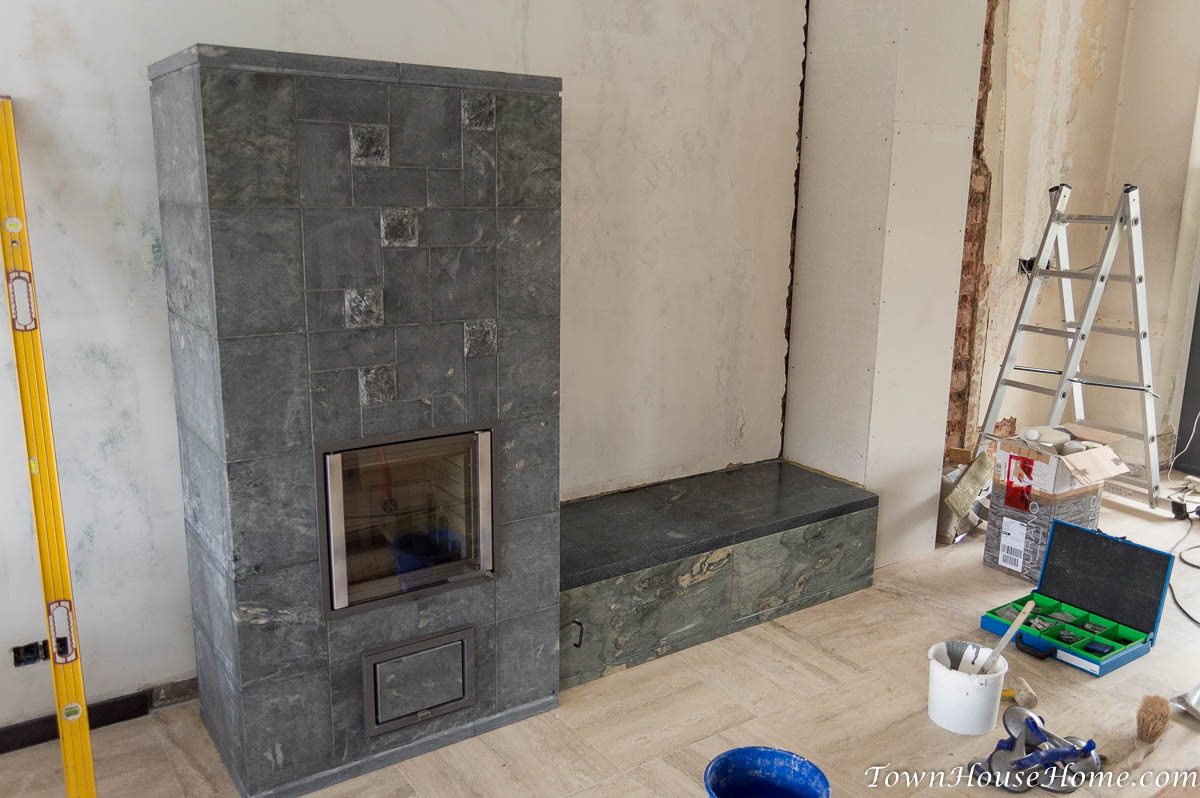 Nearly two tonne of stone in our living room (1900 and something kilogram)!

In the photo the stones are still wet from cleaning, which magnifies any differences. Once dry there still is a difference in colour, but it’s not nearly as visible as in the photo. This shouldn’t come as a surprise, it is a product of nature after all. We were also told that after using it some months, the stones will get lighter in colour, so they should end up closer matched.

It’s time to get cosy!