Shortly before the floor renovating guys came, we took off the two radiators underneath the windows street-side. That way we could finally and boldly go where no man had gone before (at least not for the last 30-ish years or so)!

Removing the radiators allowed me to scrape away at the last pieces of wallpaper that were hiding behind them. 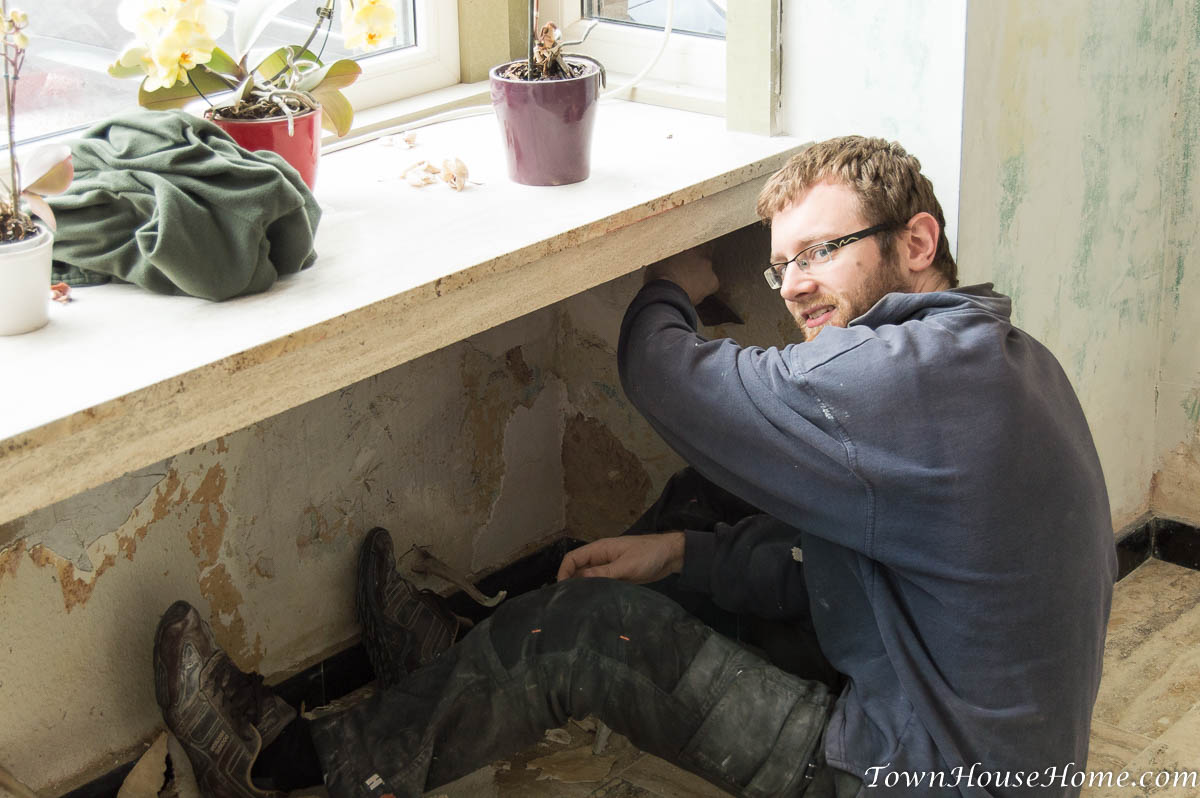 Which in its turn showed another lurking problem: most of the old plaster was loose, so I had to take it off. 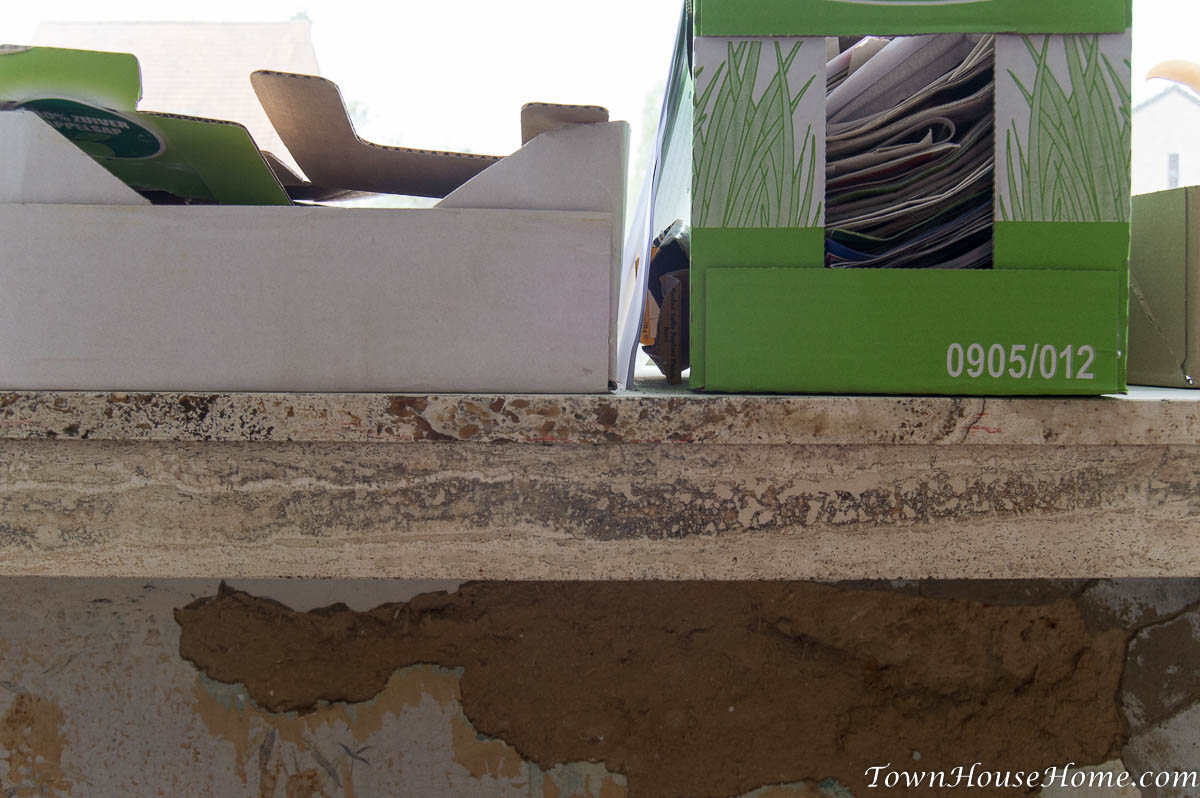 Since this still was the original plaster from the 30’s (I know the window sills had been installed by the previous owners some decades ago, and I could see the patching of the plasterwork they had done just below them), I suspect it came loose through time because of moisture traveling through the wall ever so slowly. I plan to have something done to our facade in the future, to get it more waterproof, but to prevent any unwanted looseness I decided to also do something about it on the inside: I first applied a layer of mortar. 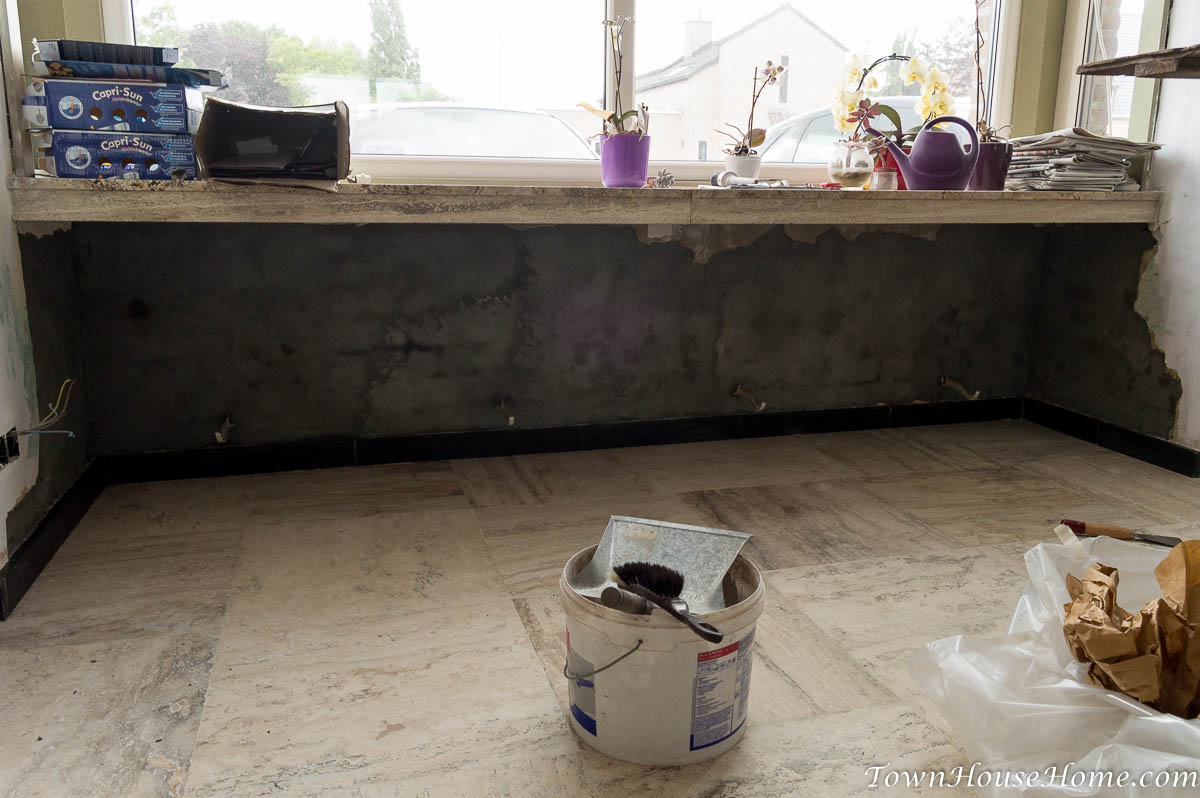 This should (in theory) keep any moisture from getting through. The downside is that that moisture (if present) will find another way out so it will show up in other places. That’s why I still need to do my research for the exterior, to prevent any water from getting in the bricks in the first place. (I cannot stress this enough: don’t just remedy the symptoms, tackle the root cause!)

When the mortar had dried out nicely I could apply the final layer, the plaster. I still had some smaller beams lying around from the kitchen, so I used them as a guide.

Before all of this I already had most of the work on the other walls done though. Back when I was mudding the ceiling, I used that same mud to go over the walls to fill up small holes and cracks and make them slightly less “wobbly”. 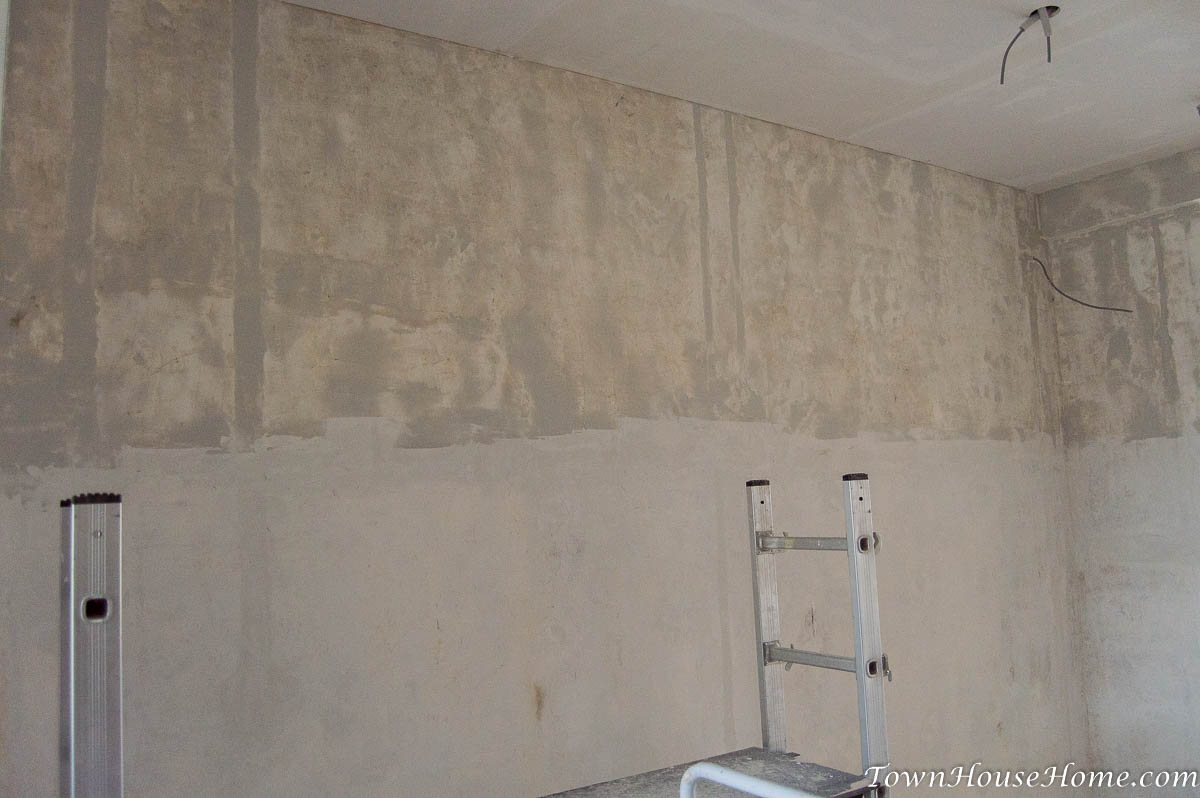 The lower part is all done and dry, the upper part I just finished but still needed to dry out some more. As you can see, it’s merely skimming over the existing plaster.

Next thing that had to be done: remove all the mud and plaster from the baseboard. 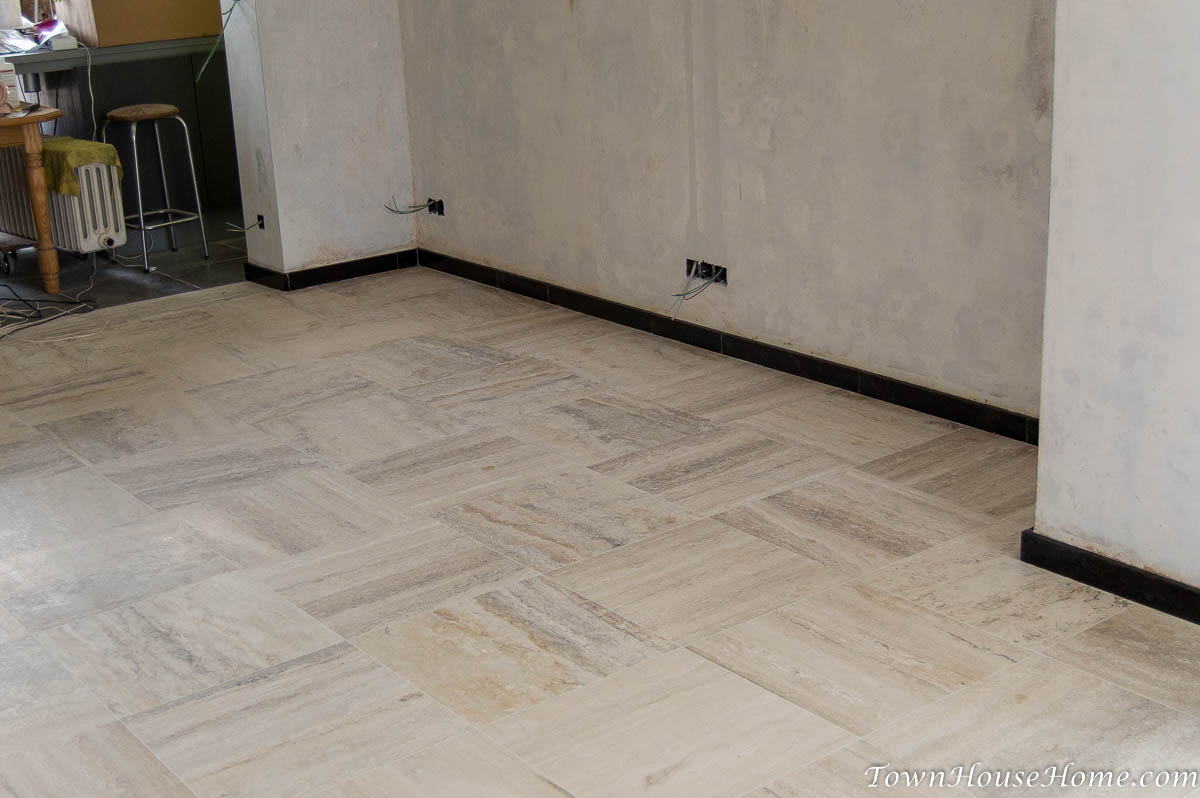 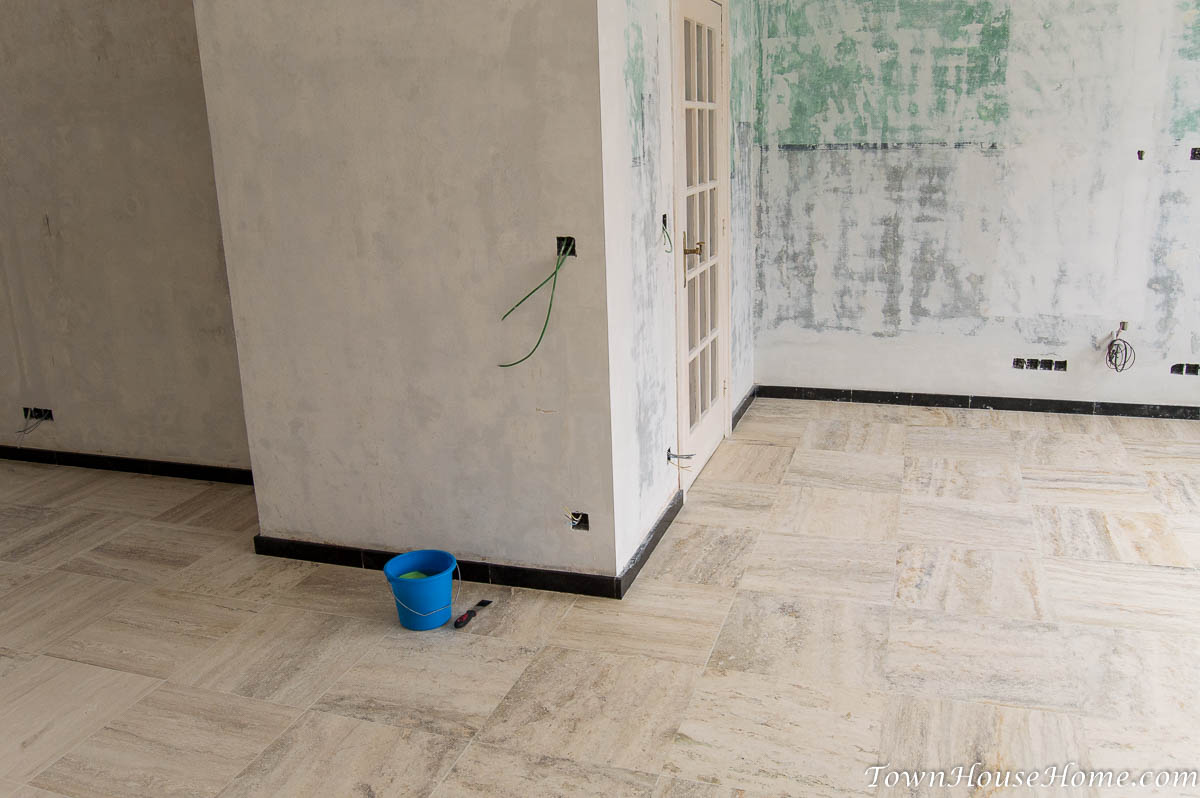 Finally, to finish off our walls, we lifted our eyes back up from the floor to the sky. What we didn’t see so far, but definitely wanted, was the molding. It didn’t have to be over the top, so eventually we settled on a very simple crown molding of 7 cm by 7 cm. Bonus tip: we tried to grasp a feeling of how it would look by cutting the shape more-or-less out of cardboard… 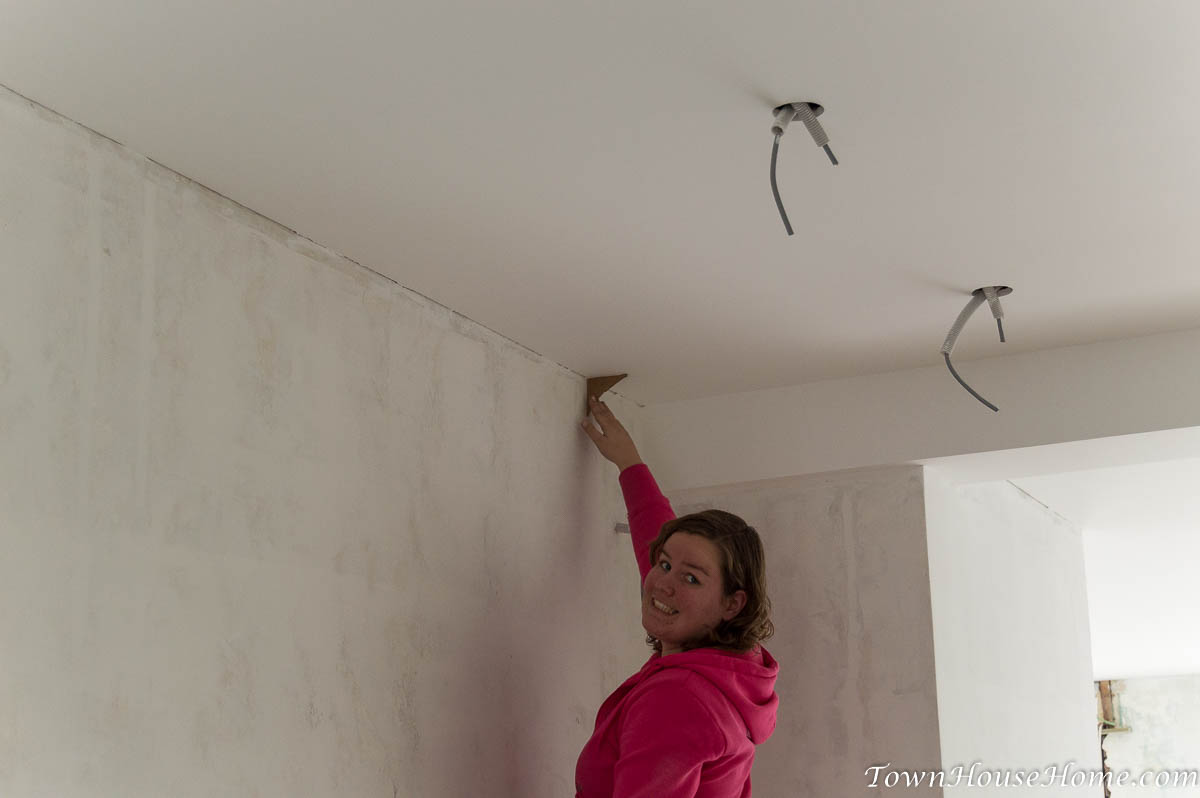 Didn’t quite exactly work though…

But I digress. We opted for the Styrofoam kind of molding: they’re cheaper, not prone to moisture or heat (so they don’t expand or contract), don’t require upkeep and according to the ones we have in our first floor rooms, last a lifetime.

Installation of these is straight forward: take the correct spackling paste or caulk (depending on the manufacturer), put a bead of it on the molding where it will touch the wall and ceiling, get it into place and push firmly. So I got a bucket of paste, took out my putty knife and got paste all over the length of the molding. Then I planted it firmly in place, and used the putty knife again to swipe away the excess paste, at the same time finishing off the molding. For the next piece of molding I also put some paste on the short side, so it would fill up the seam in between both nicely. It’s a bit tricky to work with, but if you’re patient enough you can get a finish that doesn’t show any seams at all.

Another neat trick I picked up somewhere: corners. Especially in old houses, they’re never really 90 degrees. So when working on a corner, first have the two pieces sawed on 45 degrees, but make sure they’re at least a couple of cm too long. In my case they never fit, so I held the pieces in place, saw where there was excess material and used a rasp to get a better fit. You can only do this if your piece is long enough though, hence the extra length! Once I was satisfied with how the corner mold looked, I marked the excess length and just cut it off. Perfect fitting corner, each and every time!

Once all the paste had dried out sufficiently, it was time for paint. I used the same primer and paint as the ceiling (Mathys), one layer of primer and two of paint. I went over them with a simple brush, trying not to get too much paint on the ceiling. Normally you’d install the molding before painting the ceiling, and that’s what I’ll do next time as well: a lot easier and time saving…