With the original ceiling all gone, it was time to think about what needed to be done before we could start working on the drywall of the new ceiling. After all, this is a job I don’t want to repeat anytime soon, so we decided to go all out.

When walking on the second floor you could feel the floor budge if you were enthusiastic enough (side note: we actually went as far as one person more or less jumping on the second floor and another one observing the beams from below; they actually did bend). Given the rest of the house was built to survive multiple world wars this does seem out of place. I strongly suspect those beams to be the culprit in The Case of the Cracks in the Ceiling. I needed a way to make sure they wouldn’t budge that easily anymore…

If you’d want to go all the way, you would remove the old floor, remove the old beams, put in stronger ones, and put in a new floor. Hoarders as we are, the second floor was filled with stuff we’d need to stash elsewhere (God only knows where that would be). Then there’s this little matter of Roof Guy using some unorthodox methods involving these beams. As you can see, the best option wasn’t an option for us…

The next best option then is to reinforce the existing beams. So that’s what we did.

The existing beams were roughly 15 cm high and 7 wide, spanning 4 meters across the room. In today’s standards that span would need something roughly 20 cm high instead of 15, another indication why the floor would budge…

To reinforce the existing beams I settled on slapping another one against it, with a height of roughly 20 cm and a width of 3.5 cm. In order for the reinforcement to be as effective as possible, the connection between old and new needs to be as strong as possible. So I used wood glue. And screws. And nails. Lots of them. 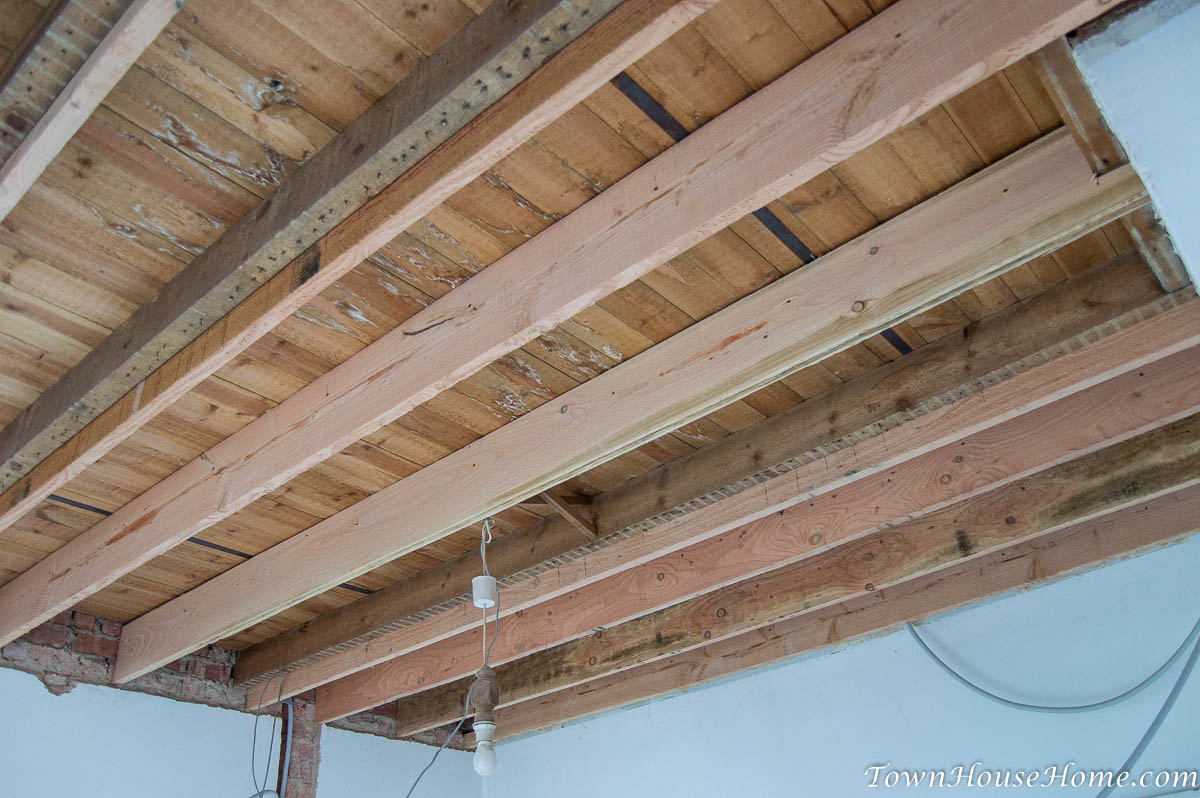 With that done all that was left for me to do was to install the crosslinks. 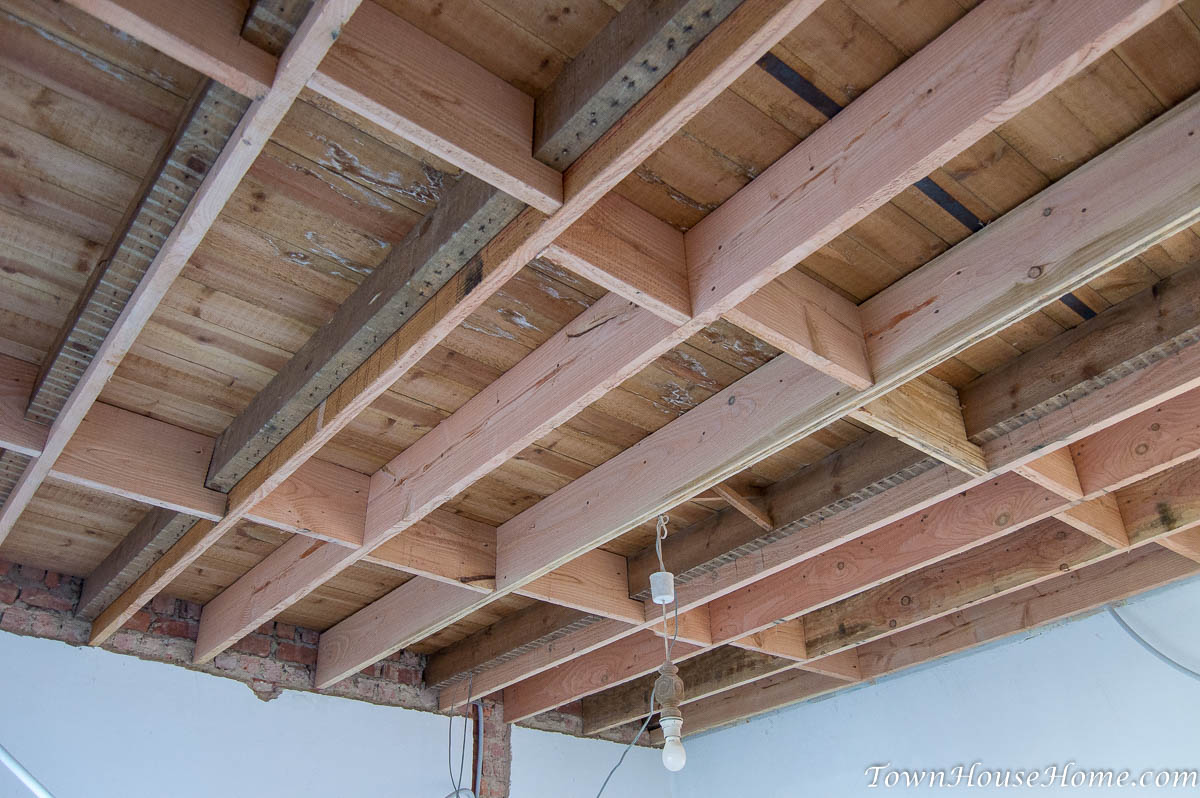 It might be in my head, but I’ve got a feeling the second floor floor doesn’t budge as much now as it did before.

With the current construction, the space between the beams, the floor and the ceiling will act as a resonance box. Sadly it’s not a musical one. Noise from above will be amplified. The solution is quite easy though: stuff roughly two thirds thickness of the space with rock wool. The wool will dampen the noise instead of having it reflect against each surface.

While rock wool doesn’t sting as much as glass wool, I do recommend using the necessary precautions while working with it. Use gloves, long sleeves & pants, safety goggles and a dust mask while handling the wool.

So I put rock wool of 15 cm thick between the beams. I’d got Knauf sheets of 120 cm wide, so I could cut them to measure myself (as no two beams had the same space between them). I measured, picked up my trusty old bread knife (any serrated knife works, as long as it’s large enough, despite several insulation companies trying to sell you a special knife to cut their insulation), cut the wool then fitted it until all the spaces were filled. 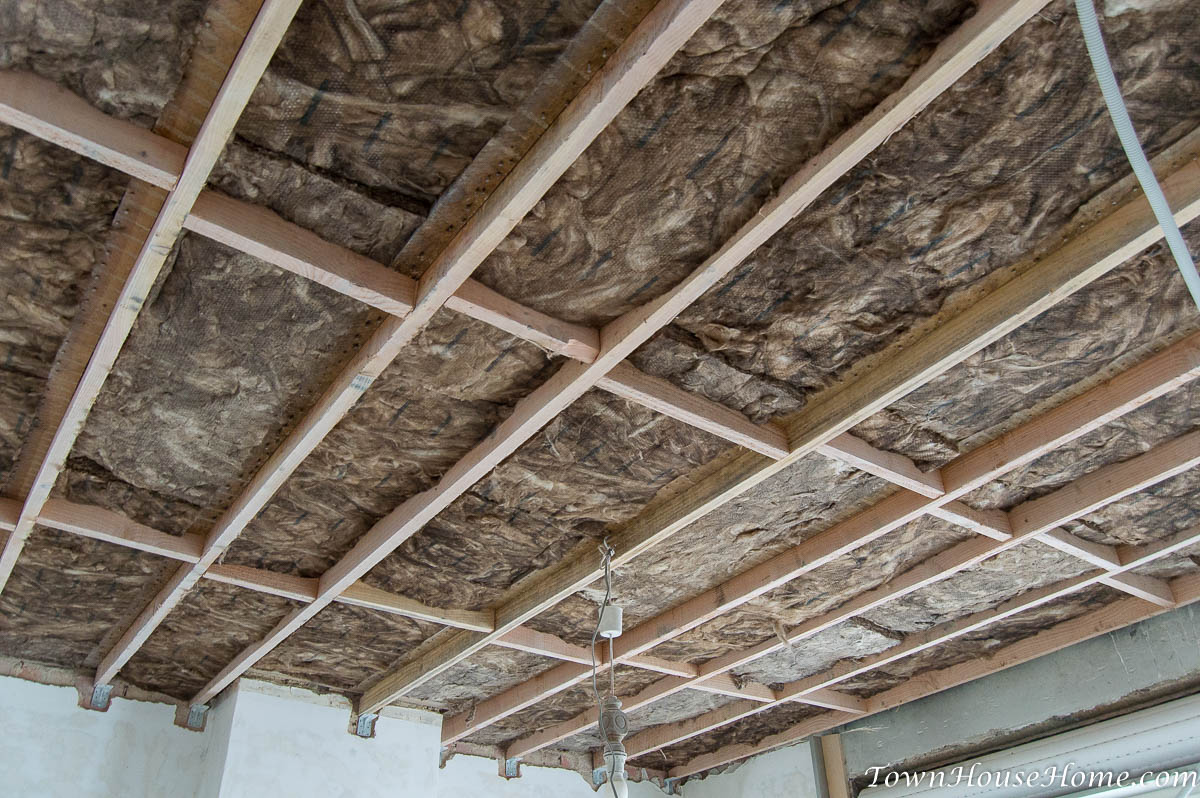 We took another major step towards finished bedrooms, even though nothing of it will be visible in the end result. I don’t think I’ll ever know what went through the heads of the original builders (or more likely, the architect) when they (or he) decided to use beams that are actually on the lighter side of the scale for the load. A strange decision indeed, especially considering the rest of the house has been built like a bunker, that we now remedied. Onwards to new electrics!