When taking down the old wallpaper (combined with all the cursing as it was stuck to the walls with what seemed like some magical super glue equivalent), we noticed the old plaster was still in rather good shape. Almost all of it (well, except underneath the window sills) was still attached to the bricks, so with only some minor patching up the walls were ready for a new layer of wallpaper. We chose wallpaper over paint because the walls weren’t really even, and wallpaper has the ability to mask that, while paint would only highlight any flaws. And so the quest for wallpaper began…

Before you can hang it, you need to know what exactly it is that you want. We had been keeping our eyes open, but that still didn’t make it an easy task: there are a gazillion different kinds of wallpaper out there, so the possibilities are endless. How are you supposed to know what you want?

We started by eliminating:
1. It’s our living room. I don’t want to redo it all over again in a couple of years, so we were aiming for something more or less timeless, without being overly dull.
2. We’re still quite young, so it can be a little frivolous, as long as requirement 1 is still satisfied.
3. We had seen a lot of examples of so-called “accent walls”, i.e. a wall that’s different from the others (a different wallpaper, wallpaper instead of paint, a different colour, and so on and so forth). We liked the idea of that, but you guessed it, conditions 1 and 2 must be satisfied.

Next we got ourselves a loan. A book loan. You know, those books full of wall paper samples.

Finding what we wanted for the room in general wasn’t that hard. Quite soon we ended up with this paper as our choice: 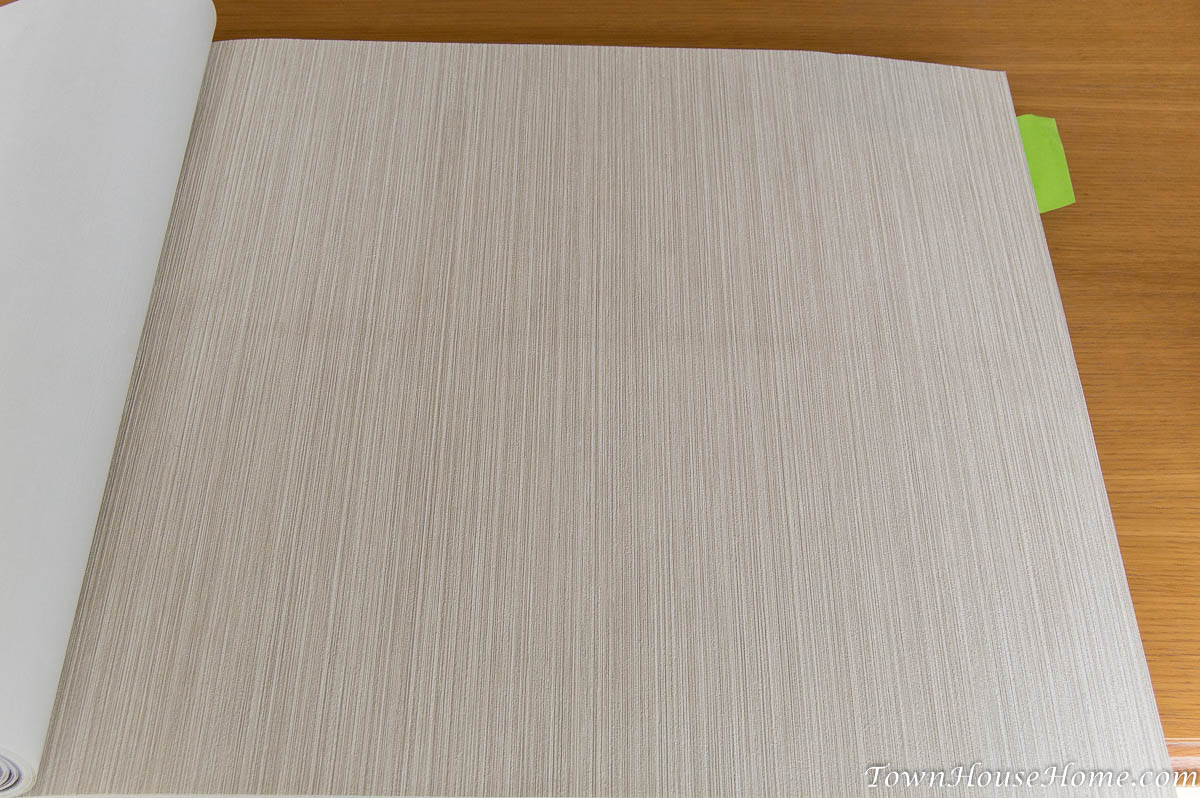 For the accent we had a number of options. We could go red… 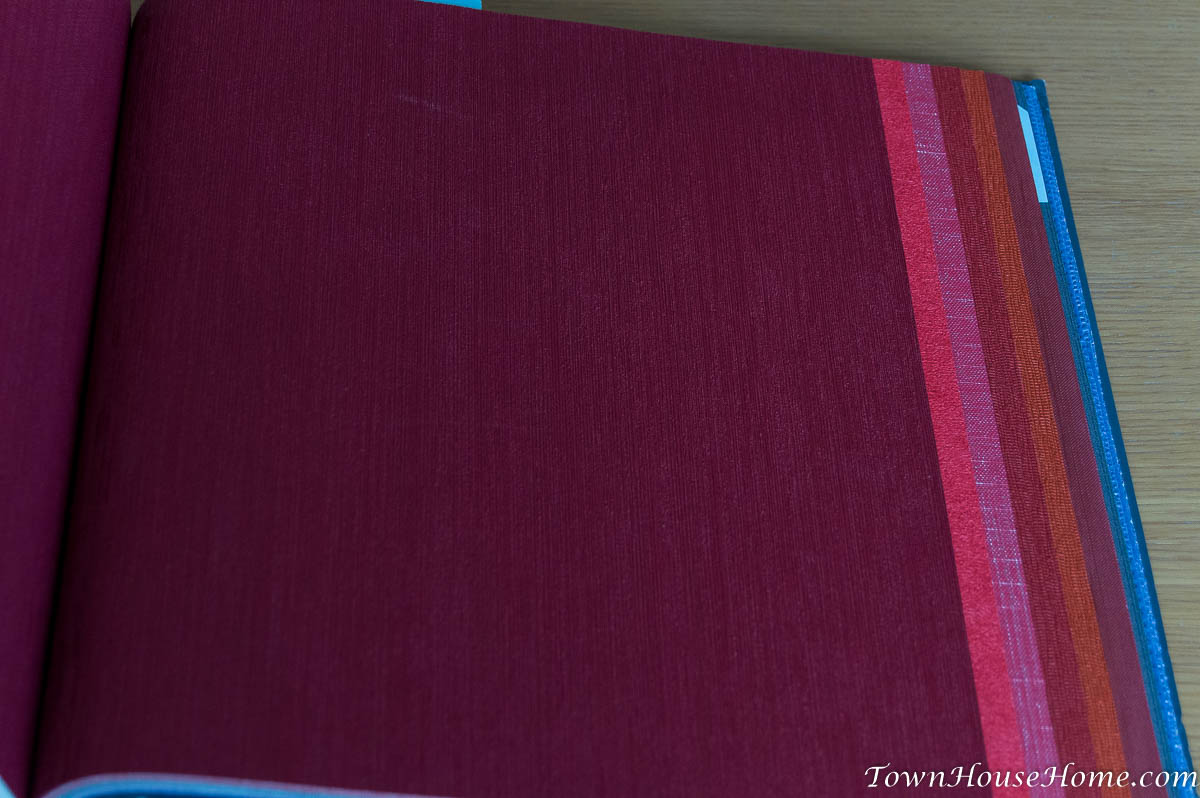 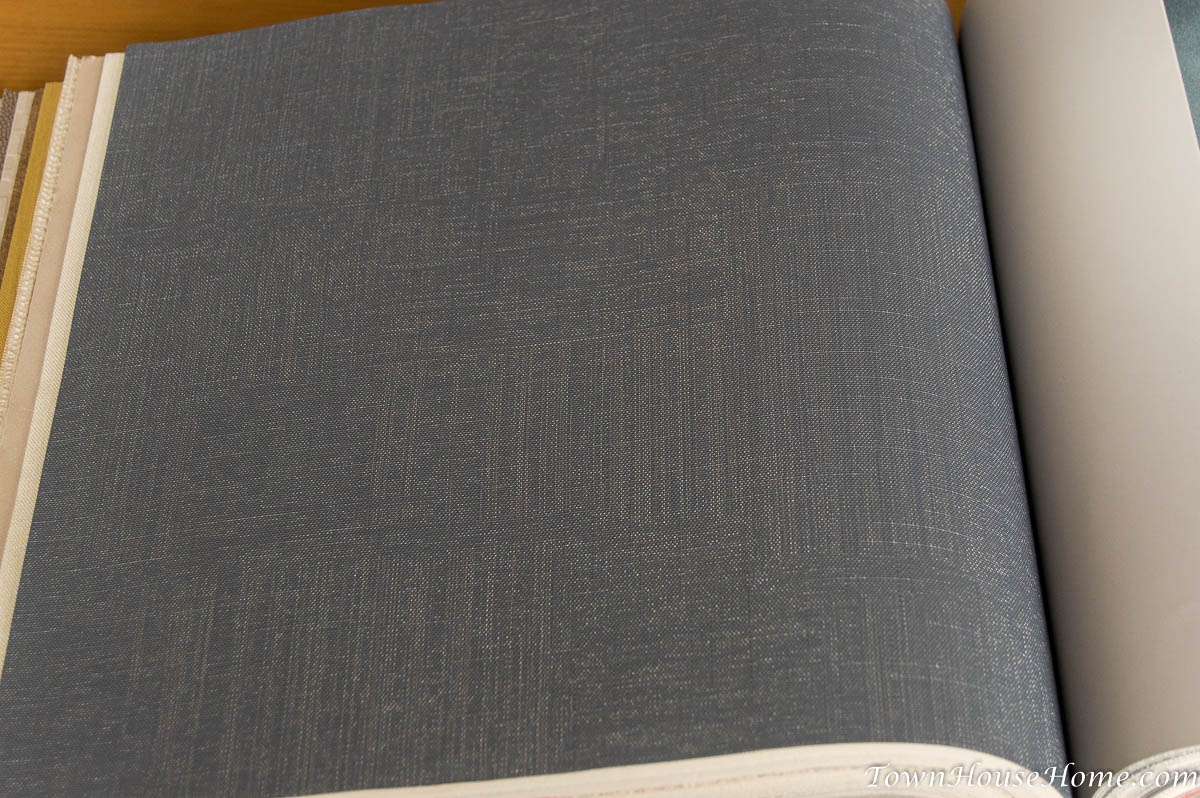 … or combine those to get purple… 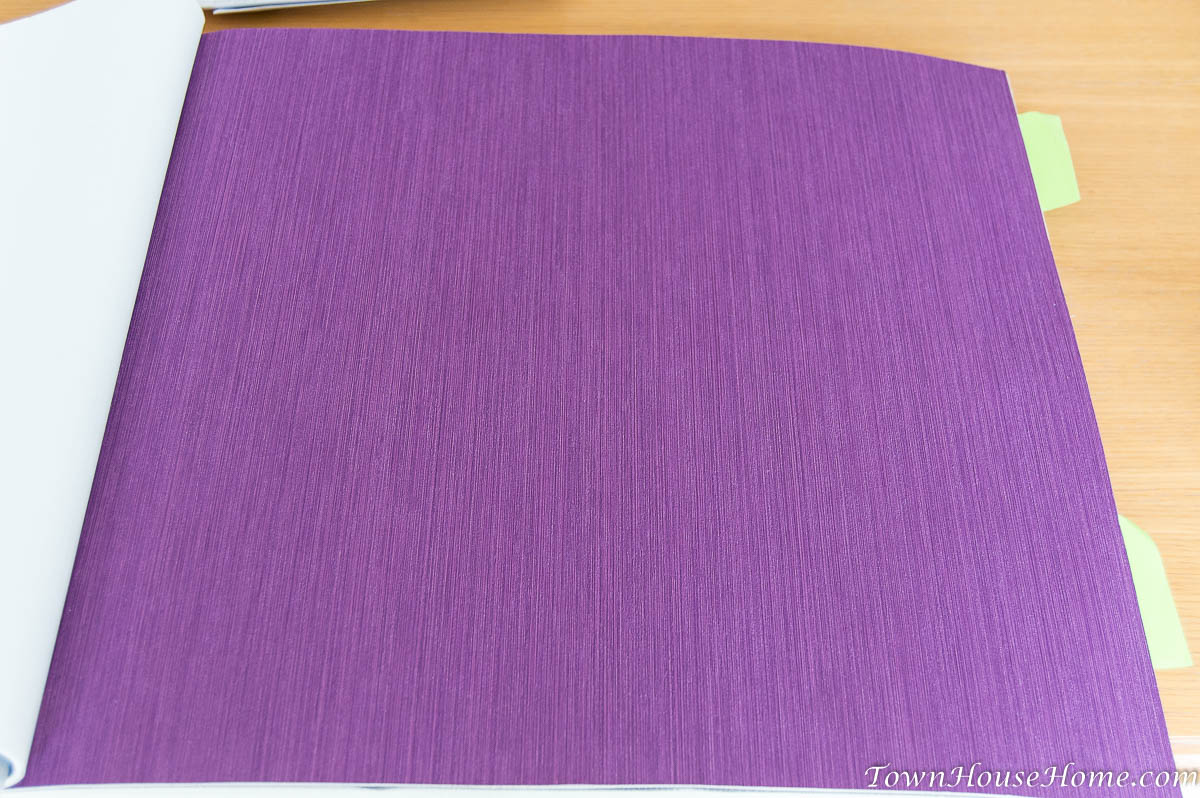 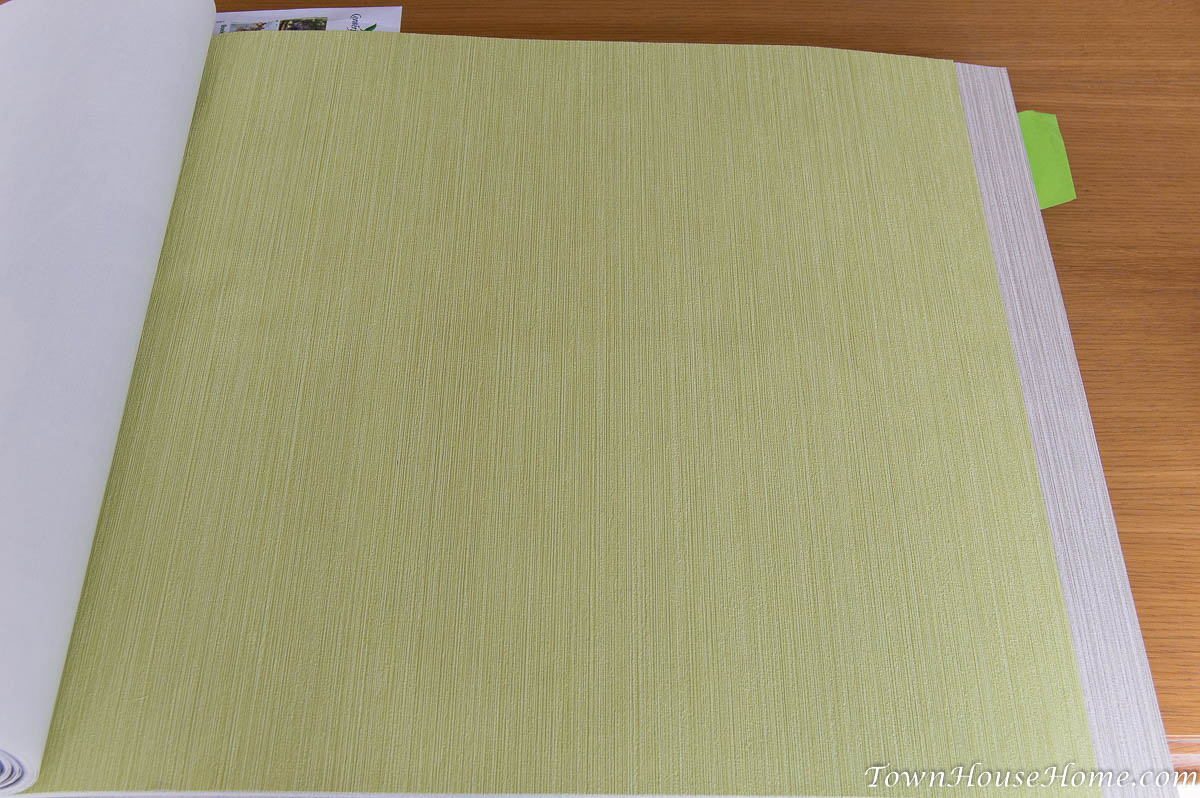 … or perhaps we could keep in roughly the same colour, but go for a pattern? 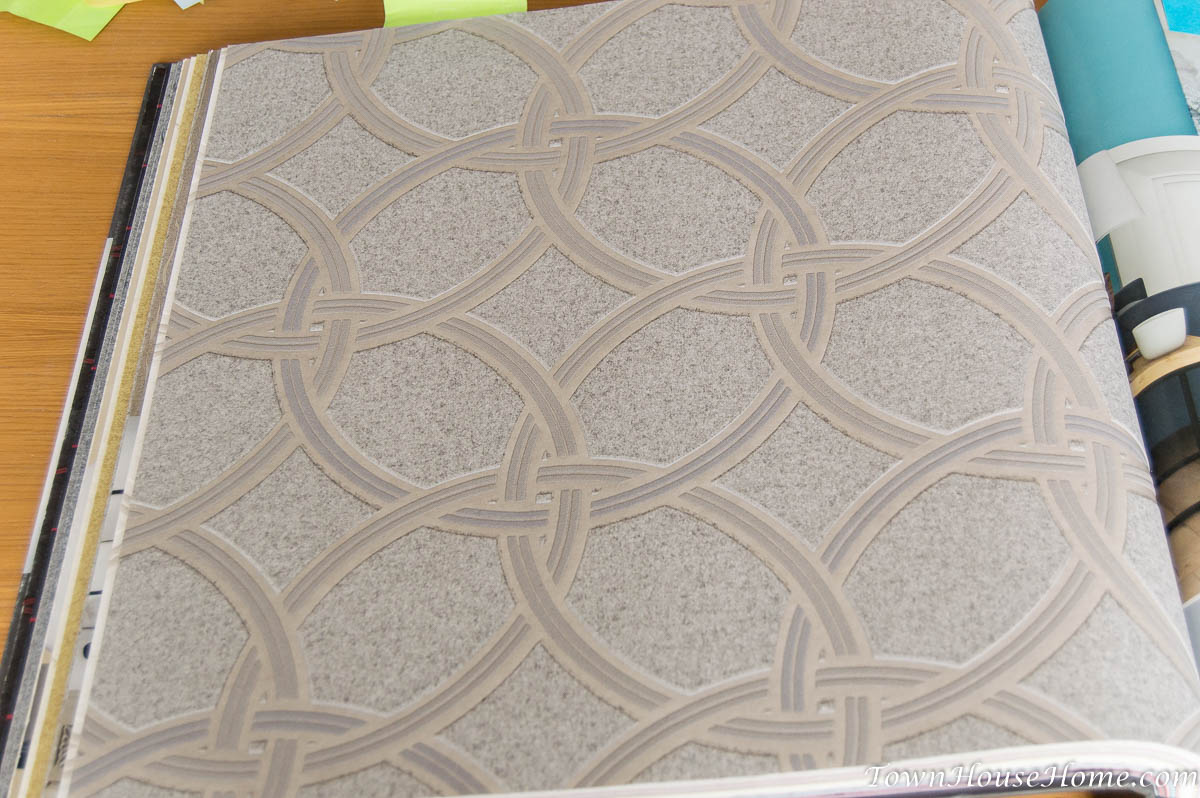 Choices, choices (and those are after narrowing it down a lot already). I even attempted a mock-up in Photoshop, but it’s so terribly terribly wrong on so many levels that I cannot ever ever let anyone see it. Honestly, it is so bad that you’ll want to burn out your eyes if looking at it for even a fraction of a second. Just don’t ask for it. It will remain in my hidden cave. For ever.

Since that didn’t work out, we tried standing in front of the wall with a book in our hand, having the other look at it while trying to imagine how it would look. Worked a bit better than the molding mock-up from last week, if only by a bit.

After thinking about it for a while, we settled on this combo: 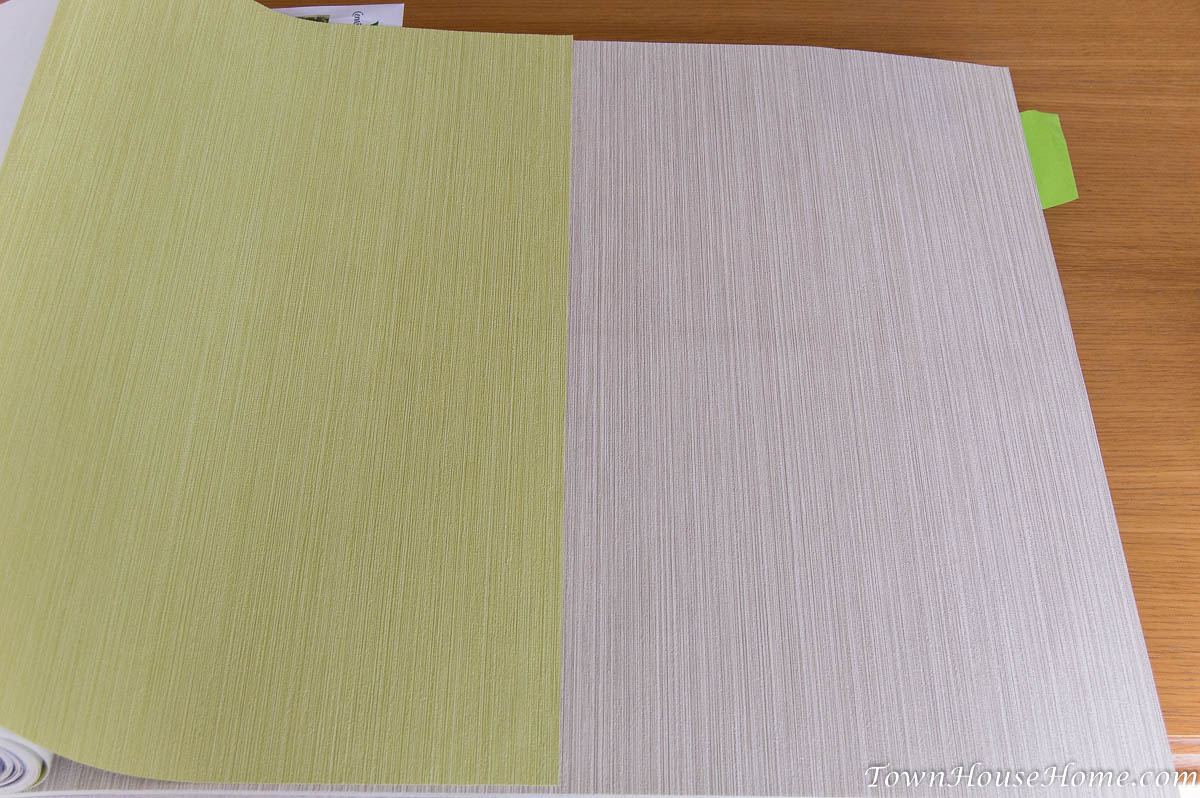 The green is the Rasch Perfecto 497892. It’s basically the same paper as the cream, but a different colour. That way we have some continuity too. Plus it’s the same green as the paint we used in our kitchen, it couldn’t be more perfect!

Before I begin with the installation, let me tell you a little family history. I have a grandfather who, way way back, used to work as a professional painter and paper hanger. He has long (and deserved) retired, but still has most of his kit from back in those days. Technology has evolved however, so some of it will not be usable anymore, but some of it still is, and that’s how I now have two super sturdy trestle supports and a wooden top with just the right dimensions for wallpaper.

The supports are in metal though, so they could scratch our newly reworked floor. 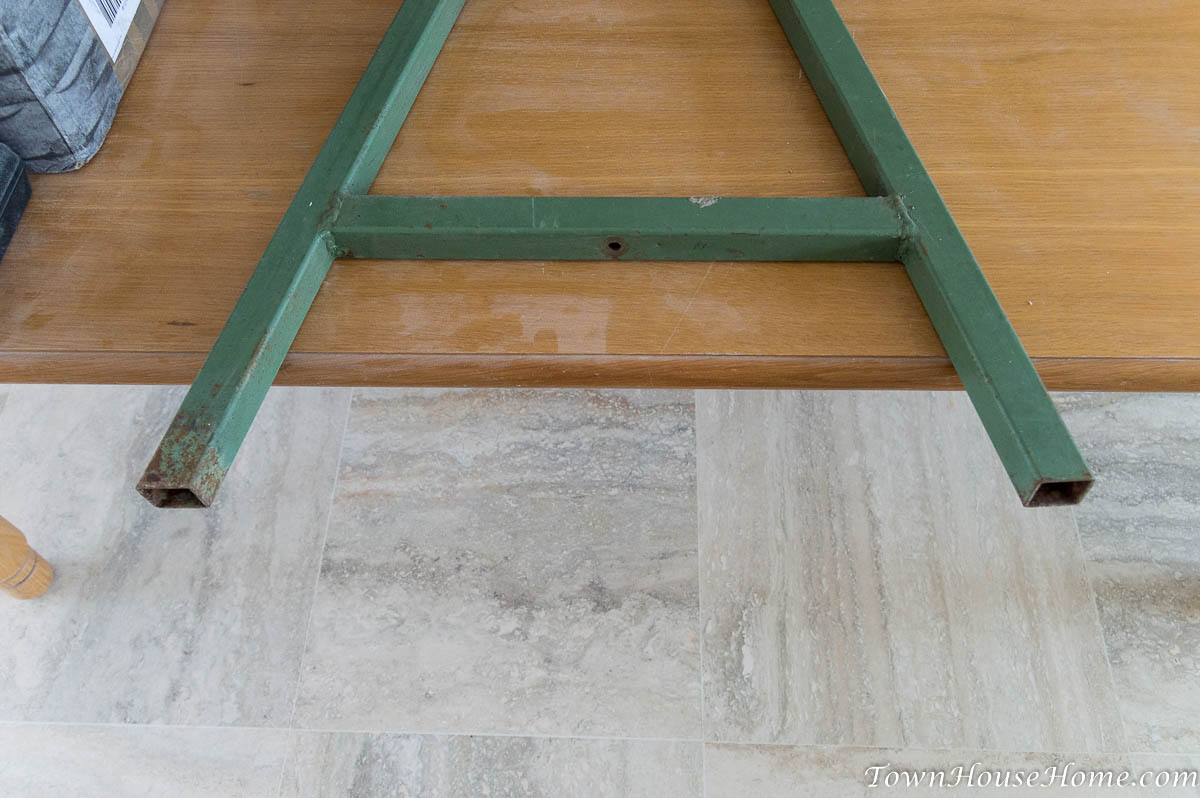 With some leftover wood… 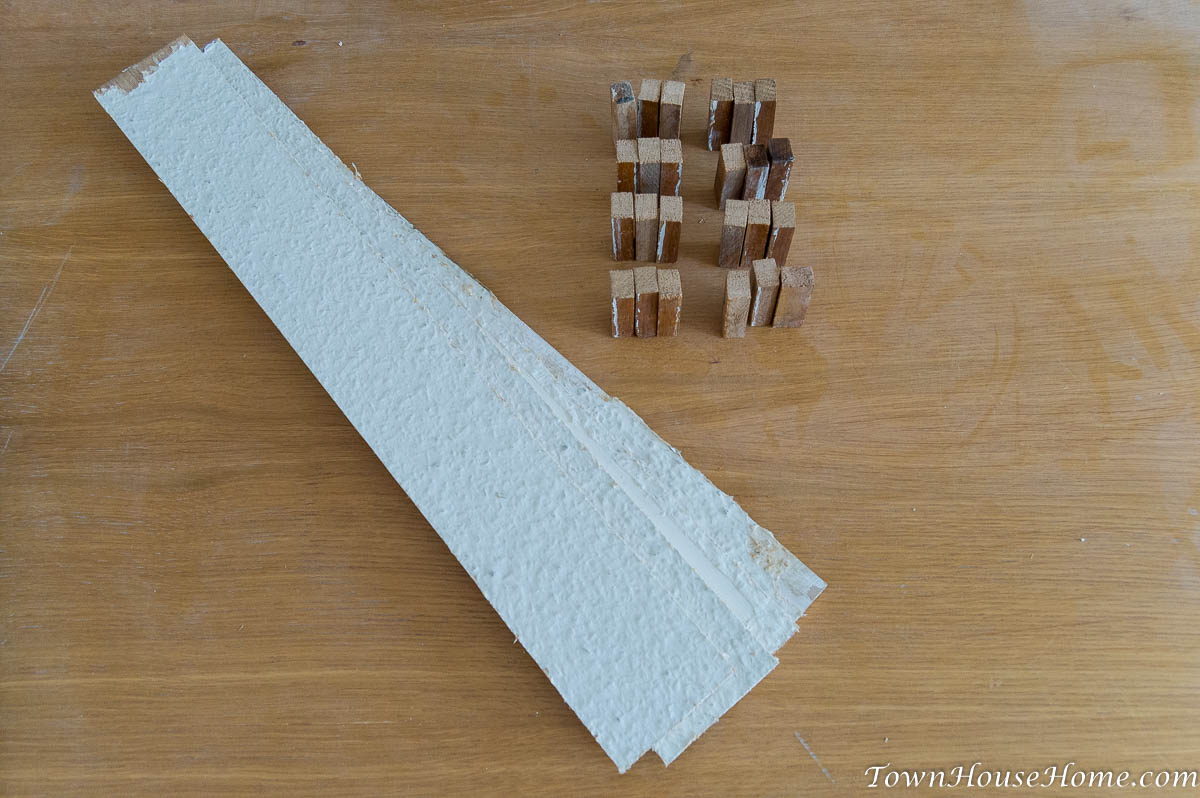 I would have preferred something I could stick to the supports, but I didn’t find an easy option yet (if any one should have an idea, please let me know!). But this did the job too. We could start!

First thing Chrisje did was cutting a couple of lengths of the paper, slightly longer than needed (around 10 – 15 cm). That way you can hang it and cut to exact length when in place. In the mean time I made sure all the cables for future outlets were tucked into their boxes nicely, so the paper would go over them without problem.

The non woven paper requires a different glue, specifically for that type of paper, we used Perfax Roll-On. It also requires a different working regime: you need to apply the glue to the wall and not to the paper. I used a paint roller to apply it to the wall, and a brush for the corners and the seams. Be sure to apply enough of the glue to the wall, as it can dry out quickly, especially on new plaster. In those cases I applied the glue in two times: I first let it soak in a bit before putting on a new layer of glue, which then kept moist long enough to hang the paper.

Once against the wall, I pushed the paper neatly into the corners (against the molding or the baseboard, so that I could cut it (with scissors, as a knife leaves and edge that’s ever so slightly frayed). Then I used some hard foam roller to press the paper firmly against the wall. Then Chrisje went over it with a damp cloth to remove any glue residue. 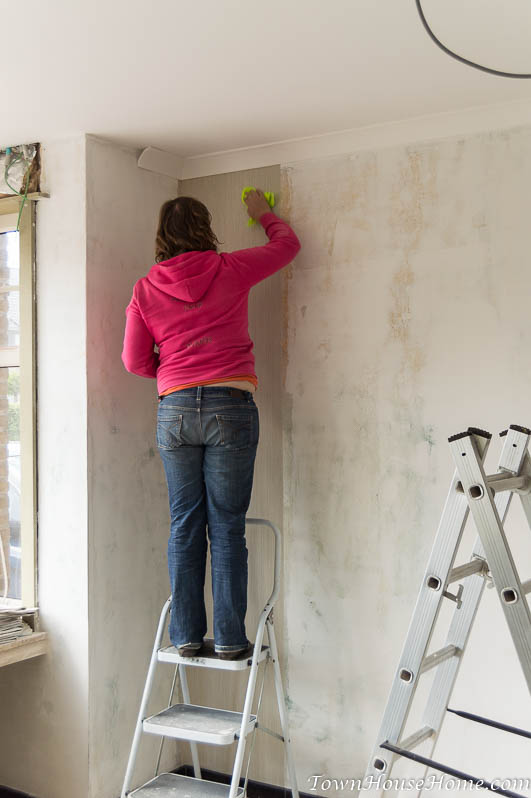 The hardest part were the outer corners. Our old plaster isn’t always level (let’s just say it’s never level). So if you bend the paper across a corner, you end up with an edge that’s not level. Luckily the paper we chose is quite forgiving in that aspect, so with a lot of tinkering around each corner we were able to get a satisfying result. I’m not sure how it should be done if it were a more demanding paper, so another reason to keep this paper for a long time! 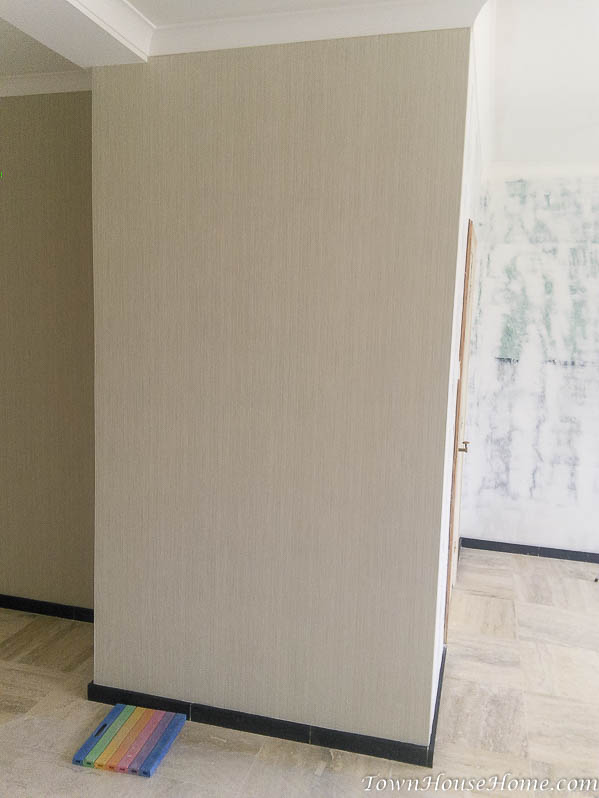 Another place where I used some trickery: above the door. Normally one would have to cut out the door from the paper on both sides. We ended quite nicely against one side of the door, but that meant the other side would have to have a piece nearly cut in two for the height of the door. I just started again next to the door and cut a piece to size to fill up the gap above it. Invisible to the eye, but a lot less work. 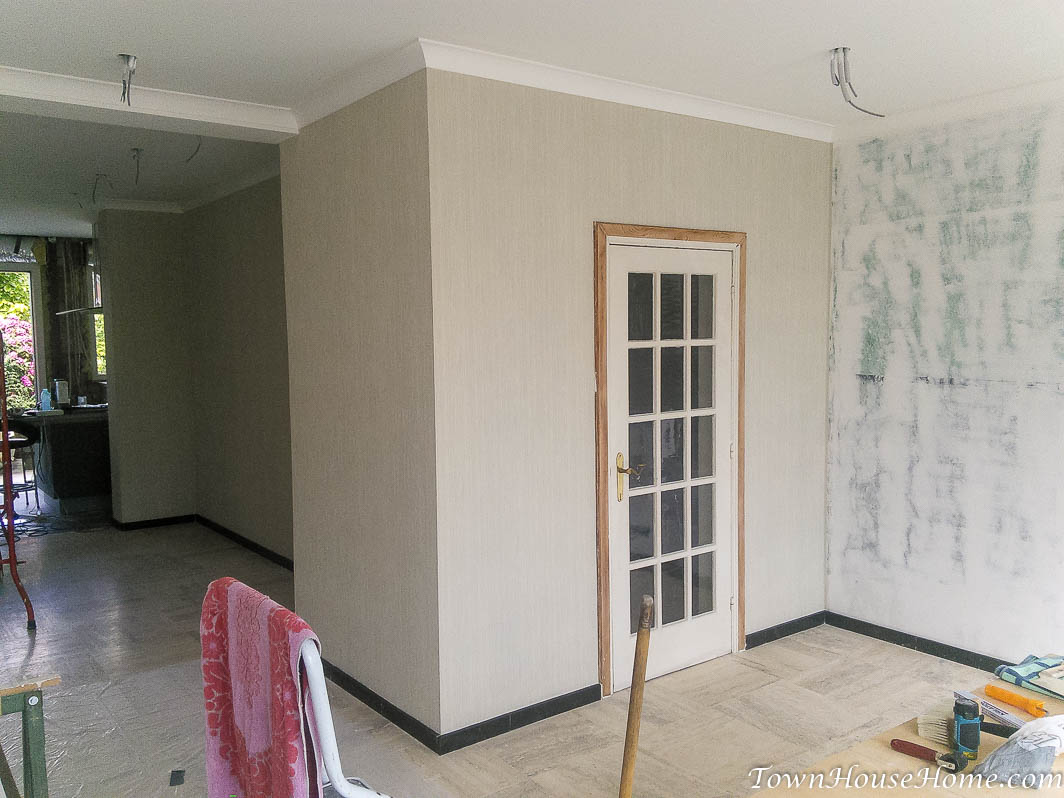 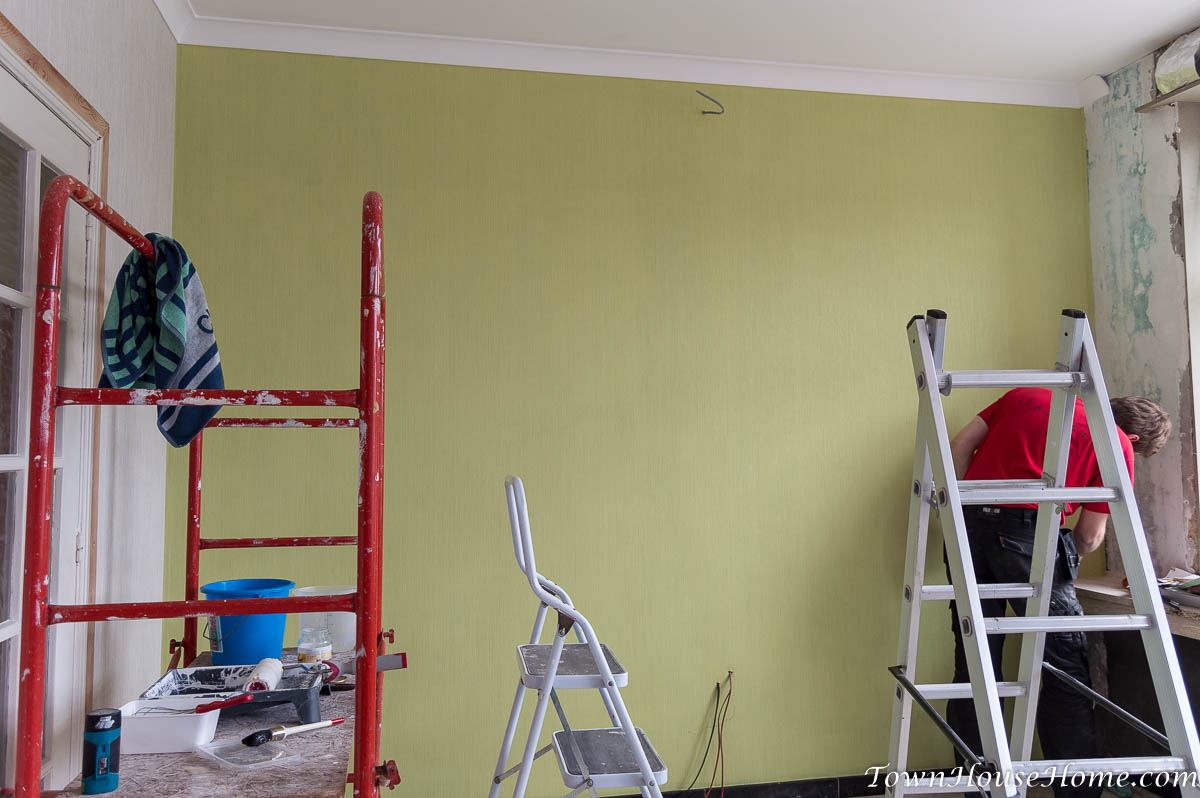 Inner corners were easier. Have a little overlap on the next wall… 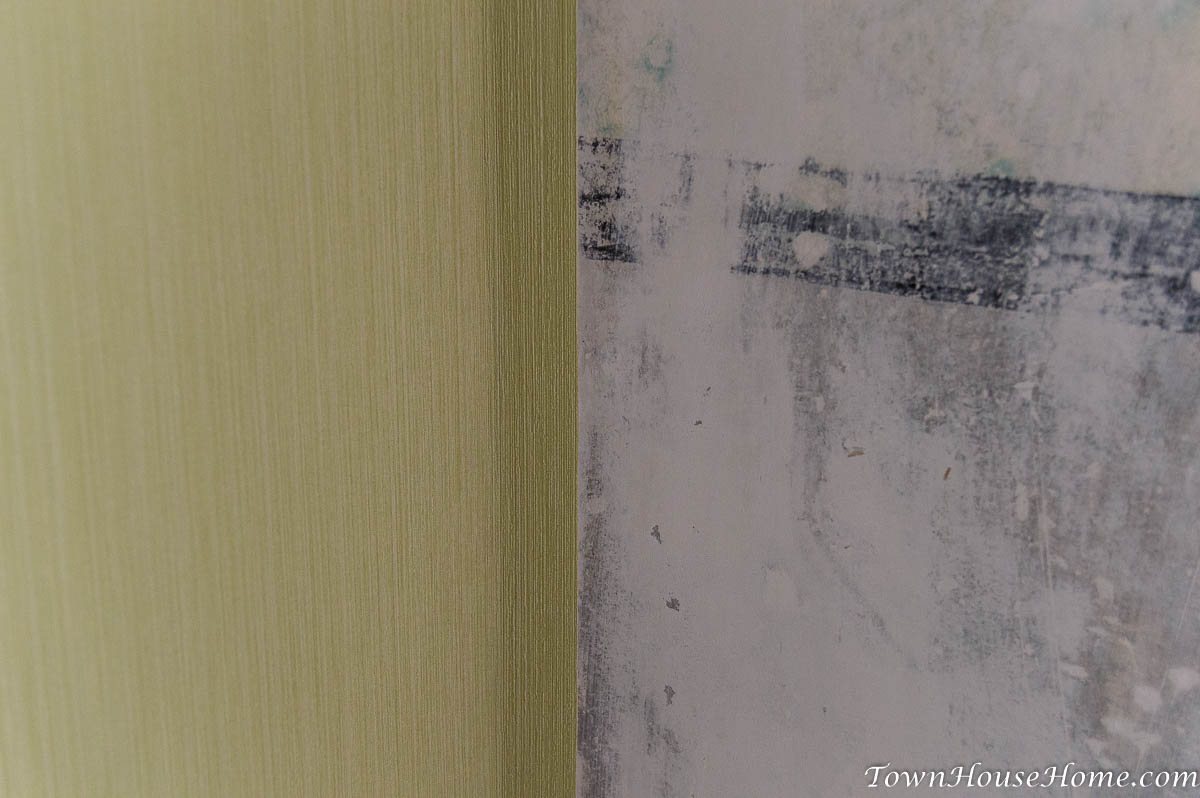 … then do the same with the other paper and cut it nicely along the corner. Once again, very forgiving paper, so tiny errors won’t be seen.

And that’s the end of it. A special thanks to Chrisje’s parents for getting us up to speed at the start!