Outlets all over the world

Most part of the world knows and has access to electricity (more or less). Not all electricity is equal though. Mostly due to historical reasons some parts of the world work on 110 Volt, others on 220 Volt. All electricity coming out of an outlet is labeled “alternating current” or simply AC (opposed to “direct current” or DC, which can be found in a battery, for instance), which basically means that the voltage goes from 110 V (or 220 V) to –110 V (–220 V) and back in a simple waveform. Guess what, the frequency at which this happens is not the same for the whole world either: some parts it does so 60 times per second (which is measured in Hertz), other parts it’s 50 times (so 50 Hertz). All of this (and many other factors) has lead to development of different outlets in different regions (or even countries), which you might have come across already if you’ve ever traveled internationally. Different pins, earthing types, and so on and so forth.

I won’t bore you to death with more details (if you really want more, I suggest you scroll through this Wikipedia page, if only to get a little overview of what types of plugs and outlets are in use). Just know these differences exist, so you won’t be surprised to see our outlets not looking like the ones you’re used to.

Speaking of which, we chose to use Niko outlets and switches. It’s a Belgian company that is actually quite big on our market. We opted for the Intense series in bronze. For those of you that live in Belgium or its surrounding countries, they’ve got outlets you can use (I didn’t find any on Amazon, Bol.com does seem to have them, but to be honest I’d get them at a local wholesale). The rest of the world is out of luck though…

When wallpapering (is that a verb?) we made sure all cables were tucked away neatly. Now is the time to get them back out. I did so by first localizing each box in the wall, then gently feeling where the edges were and make a cut along them using a sharp knife. Sometimes I needed a bit of glue to get the wallpaper back to the wall again, but all in all this went really well. I had liberated the cables! 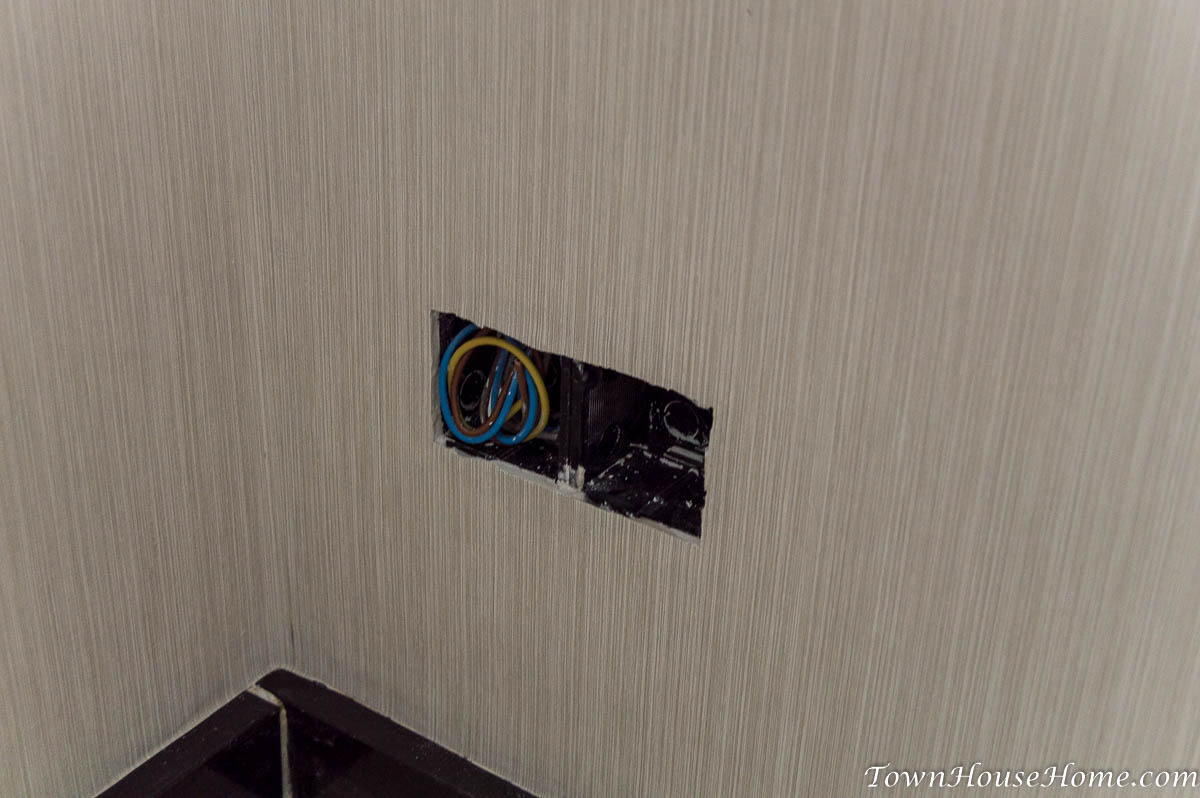 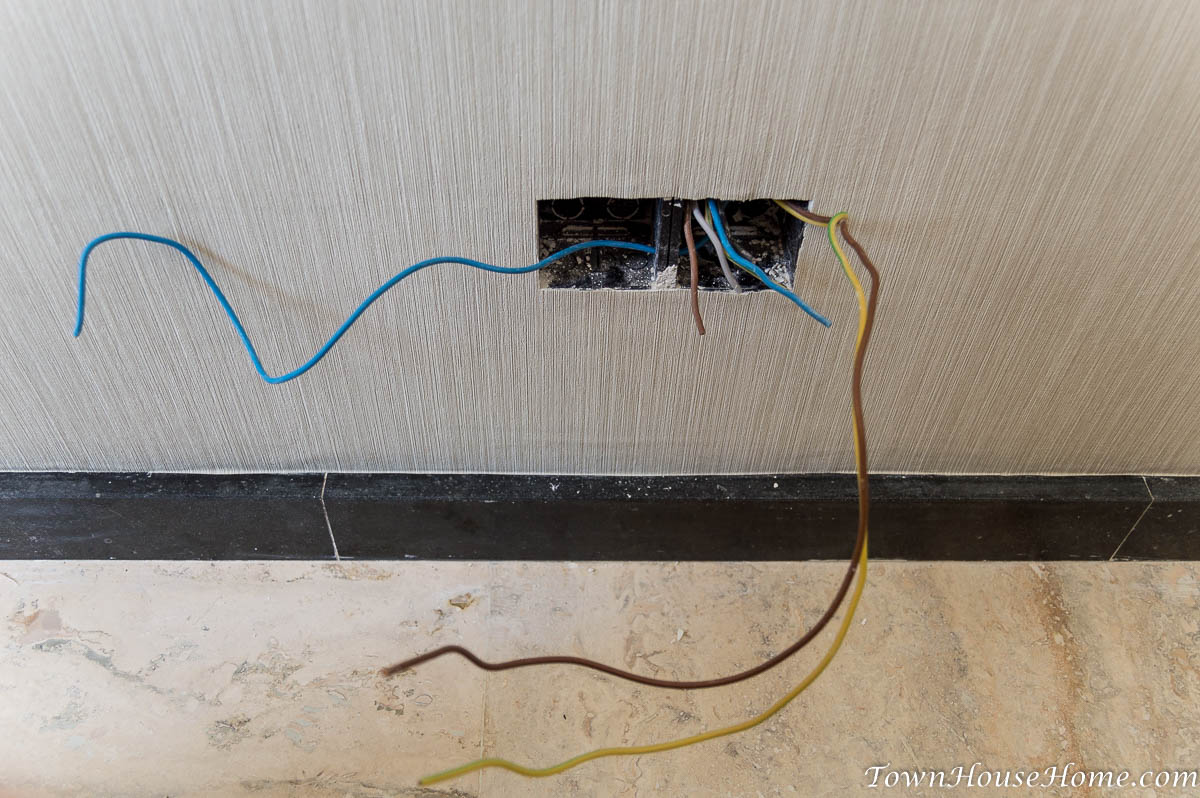 Next was the actual installing part. Yeah, take an outlet, screw three wires in place and then wrestle with it for a couple of minutes to get it in place. Now wash rinse and repeat. 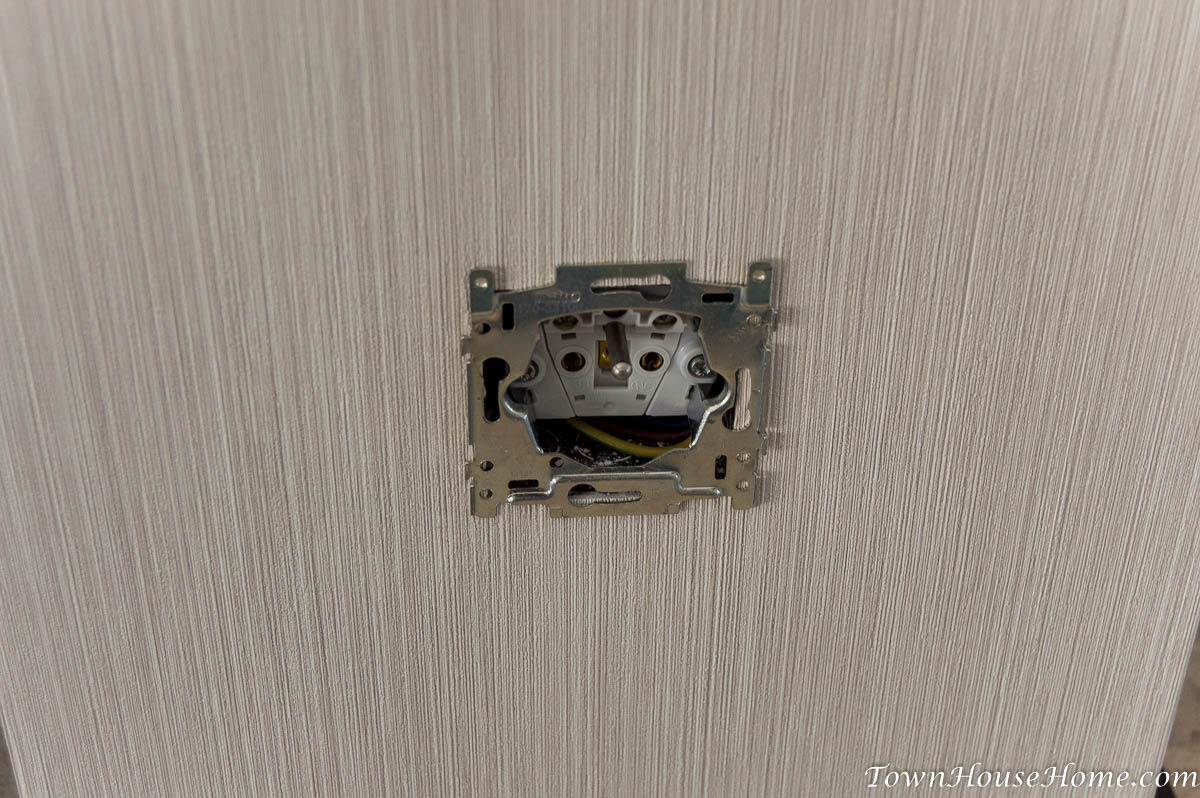 Each outlet has two claws, one left and one right, which you extend simply by tightening a screw. What I did was (once the cables were screwed in) simply push the outlet in its box and extend the claws so that it stays in the box, but you can still wiggle it. Then I used my small Stanley MLH30 level (which we got back when framing the huge support beam) and gently wiggle the outlet level and perfectly in place before tightening the claws all the way. After you’ve done a couple of them, you’ll know how long to leave the wires (not too short, not too long, I think I leave mine around 10 cm protruding from the wall), how to bend the wiring to easily get the outlet in place (hint: an S-curve always works well) and how hard you can push before you should check if something isn’t blocking the outlet from going in further.

Remember when we talked about planning the living room? Then I said I’d put at least a double outlet everywhere, but that just adds to the struggle: now you need to line them up too! 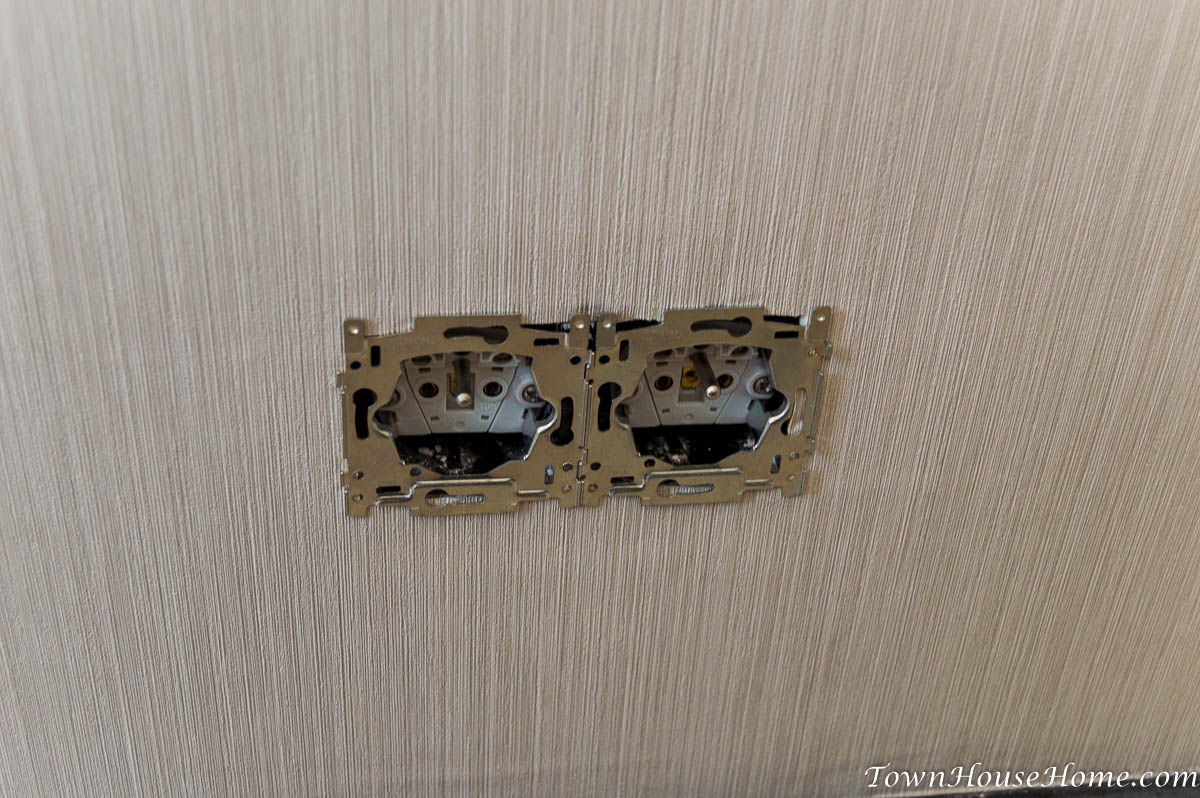 Once the frame is in place, it’s simply a matter of screwing on the center piece(s) and then the final surround plate clicks onto that. 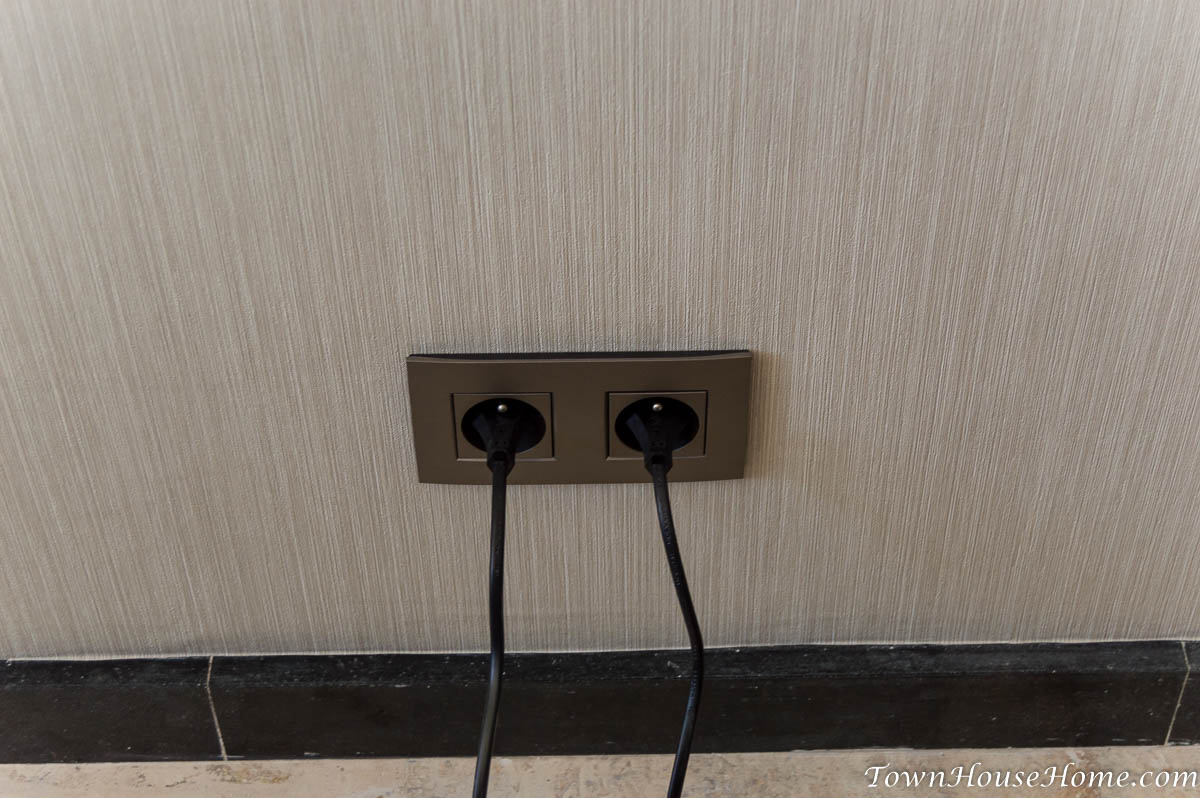 I put one outlet for the phone in the wall so we could set up the base station in our living room. I used network cable for this (which can be seen as phone cable on steroids) as this allows for more flexibility (seeing a trend here?). I still have to figure out how to wire it at the other end, but for future reference I took this photo. 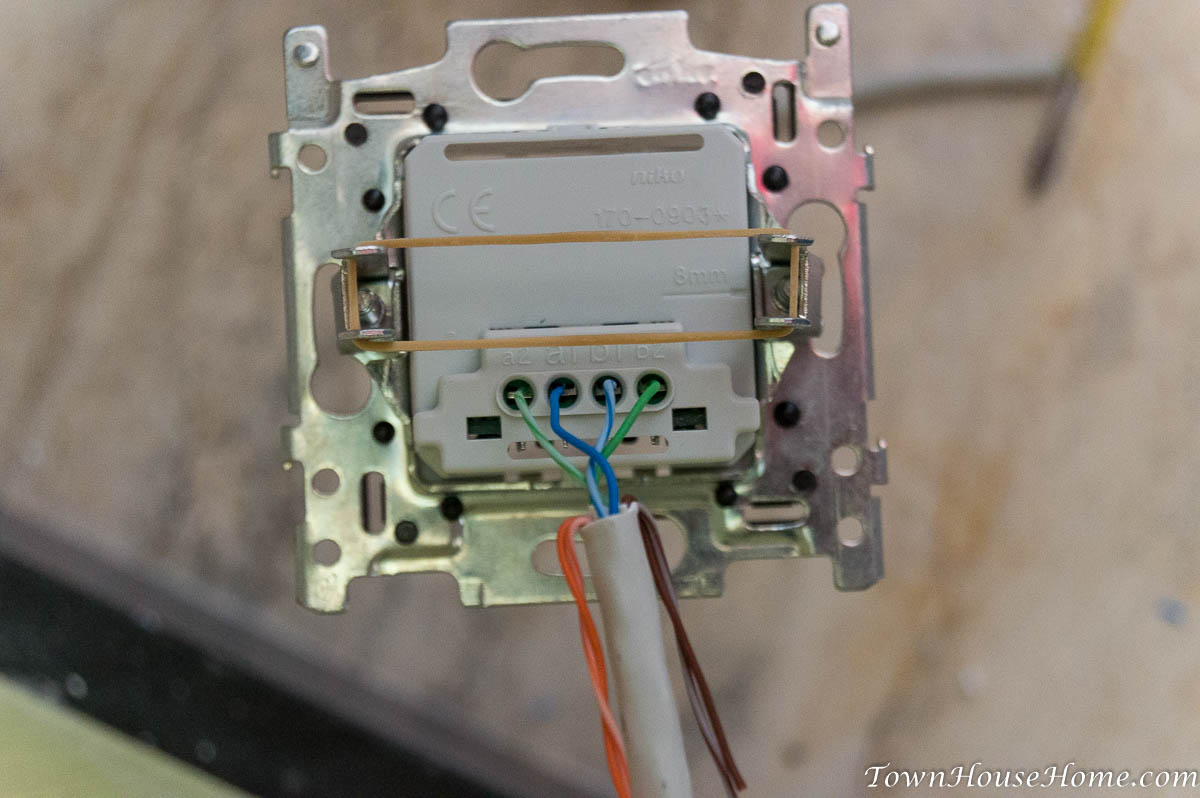 Then it’s just installation as if it’s a regular outlet, with the claws and the level, such fun.

Even though the possibilities with wireless are endless nowadays, I still feel the need to put network outlets everywhere. In this room I mostly felt that need where the future home cinema will end up. Just think about it: a smart tv, network enabled receiver, digital tv decoder, game console, HTPC… Things add up quickly. Anyway, these are probably the most easy things to install: push the wires into the connector as instructed… 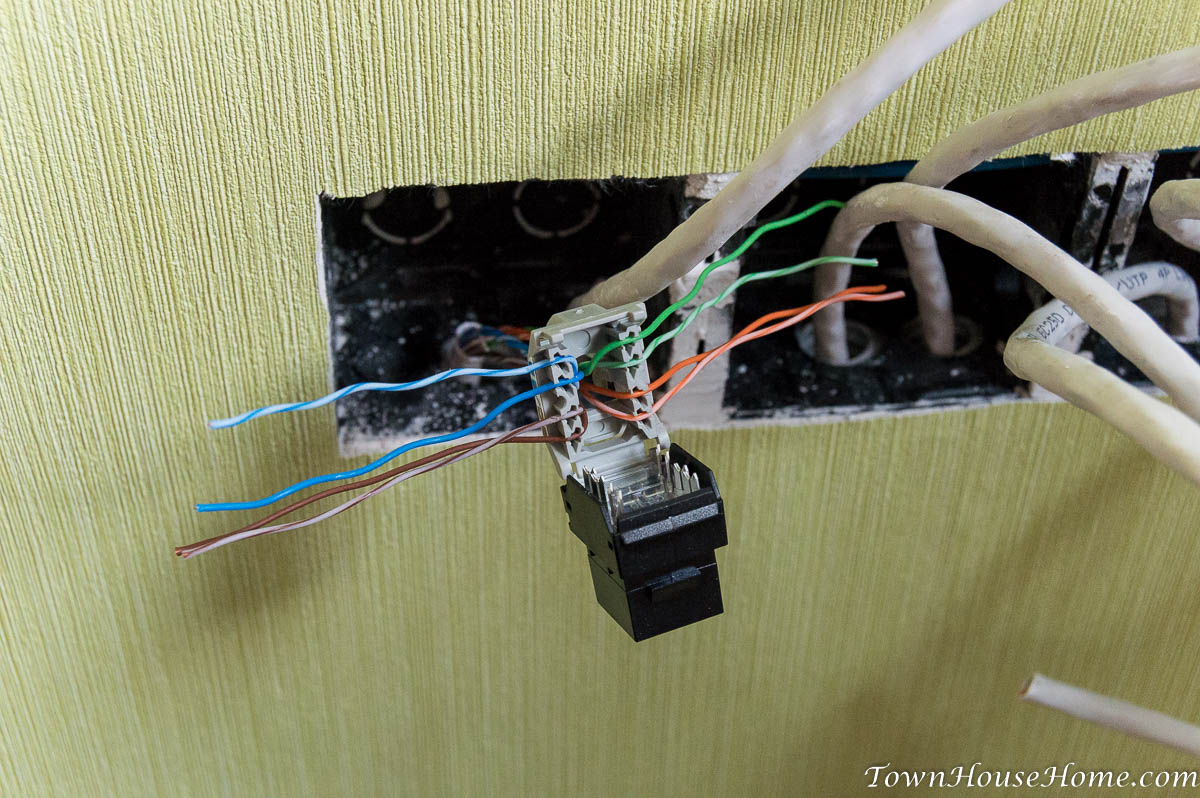 … if you’re installing double outlets do the same for the other wire and connector, click them into the frame and install as if it were a regular outlet.

It might become old technology, but regular coax cable (for radio and tv) is still somewhat of a necessity. Installation is also easy: strip the cable for a cm to its core, then another cm (or two) to its shielding, and screw it into the outlet. Then, you’ve guessed it, install as if it were a regular outlet.

That’s all there is to it. The easiest part of the electricity upgrade has been done.