Fixing the walls on the first floor

I ripped up the walls to put new wiring in place. I took down some old plaster because it was either loose (in the bay window), or damaged from water intrusion (thank, Roof Guy). Now the time had come to fix it all, so we had pristine plastered walls again.

The process of plastering a wall didn’t change from last time I did it: mix the plaster with water, apply it on the wall, let it dry for a while then finish it (that’s about the shortest description one can give, apart from “plaster the wall”).

For those of you that need a little more explanation (the others can skip a few paragraphs), the process goes as follows. First, you should go to your local building supplier and buy the amount of plaster you need (if you know the area you need to cover, most bags should indicate what area you can cover with one bag, given a standard plaster thickness; this should give you an indication). Mix the powder with water ( should be on the bag as well), let it sit for a couple of minutes then stir again. Don’t prepare too much at once though, as the plaster will set in 15 to 45 minutes (depending on a lot of factors such as type of plaster, amount of water didn’t quite match the prescription, …) after which you’ll have to throw it away (but first pray you’ll be able to get it all out of your bucket in which you prepared it).

Now that you have your plastery goo, throw it at the wall and go over it with an aluminium bar to create a flat surface. Let the plaster dry until it doesn’t stick to your finger any longer, then go over it with a moist sponge. Now you can finish it off with a plaster knife to create a smooth surface.

I had to do this everywhere I ran a new cable, or put in a new outlet or switch. I also had to go around each room for the lowest 20 cm of the wall or so, as the previous (tile) was a lot higher than the new ones. 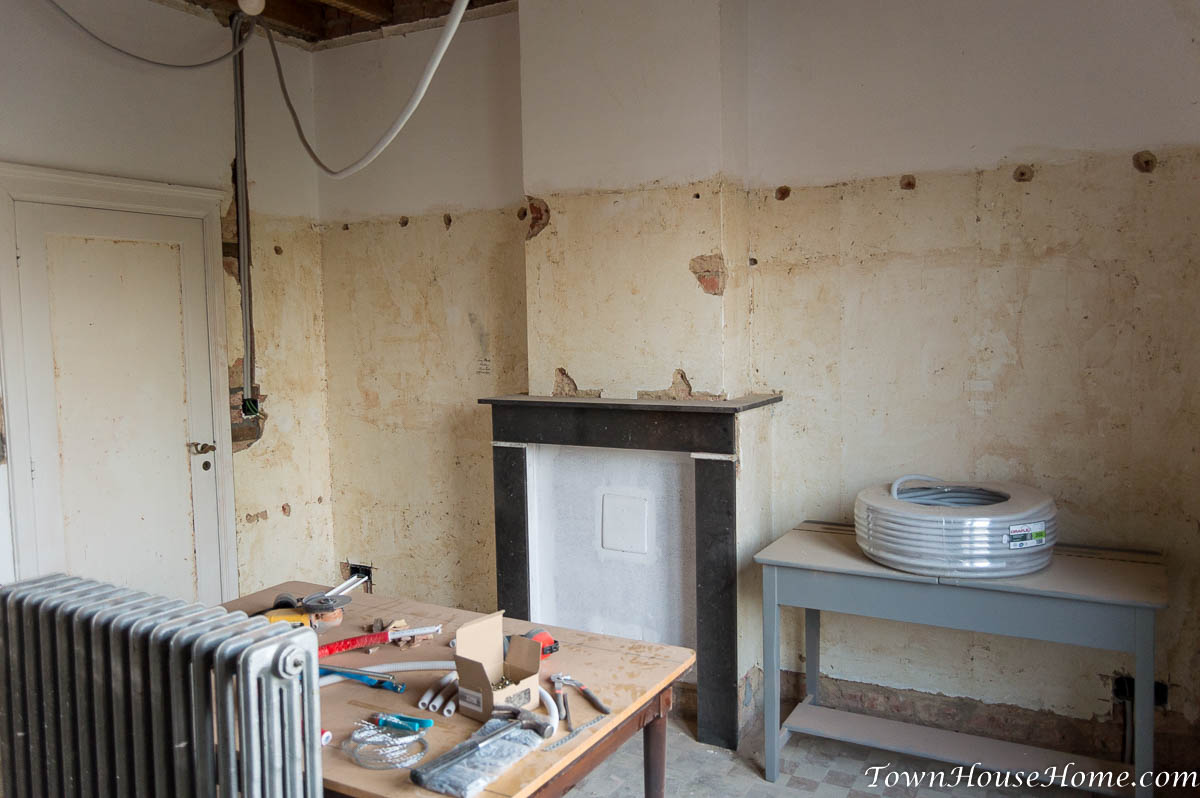 I also had to fill some minor holes where the old built-ins once stood, and around the old mantle.

Ah, the bay window. I saved the best part for last. That beautiful, protruding window which allows us to look in three directions all at once, available at our ground floor, first and second floor. It had some issues on the ground floor, and those same issues reappear on the first floor (wouldn’t you have guessed that): loose plaster.

I opted for the same solution as I did before. The only difference is that here I snuck tubing for the radiator in the wall, whereas in the living room I had to run those in sight. First the old plaster came down… 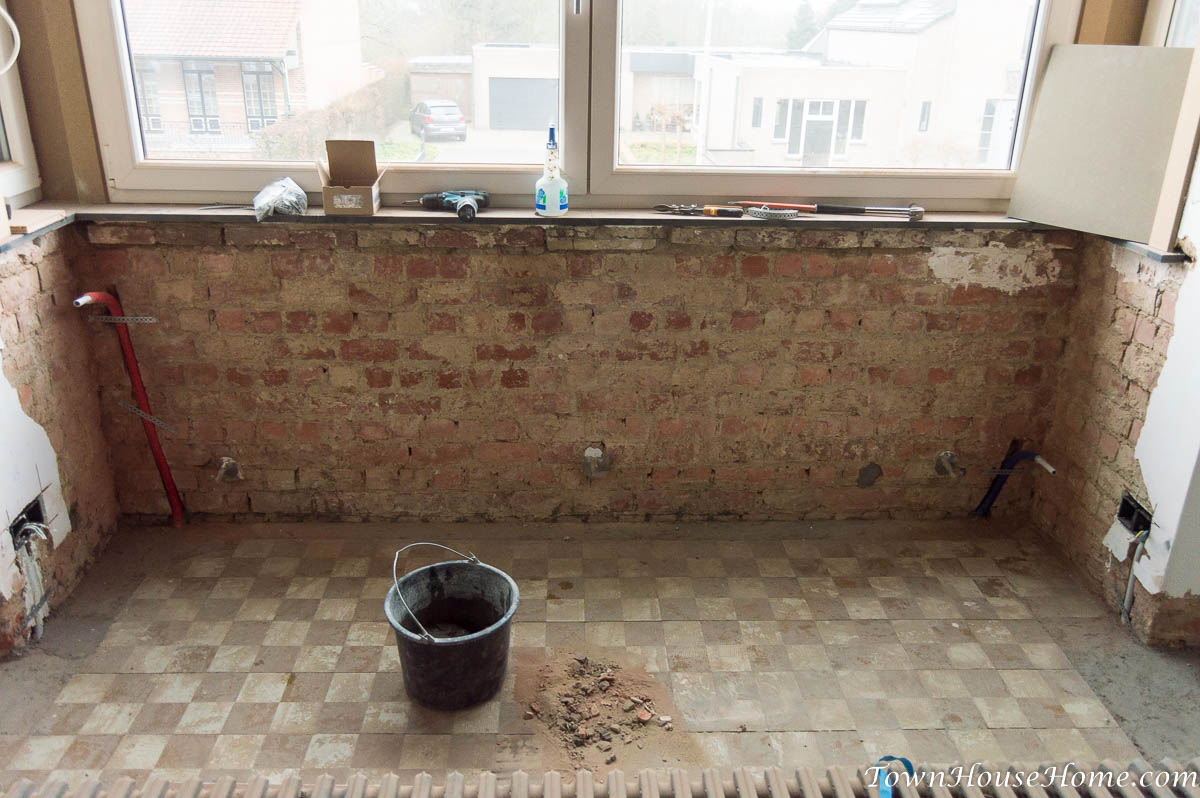 …then I applied mortar roughly half the thickness of the old plaster. Disclaimer: as before, do not forget that I still plan to tackle the outside of the wall, to stop any water ingression. If you don’t do that, this will only be a temporary fix! 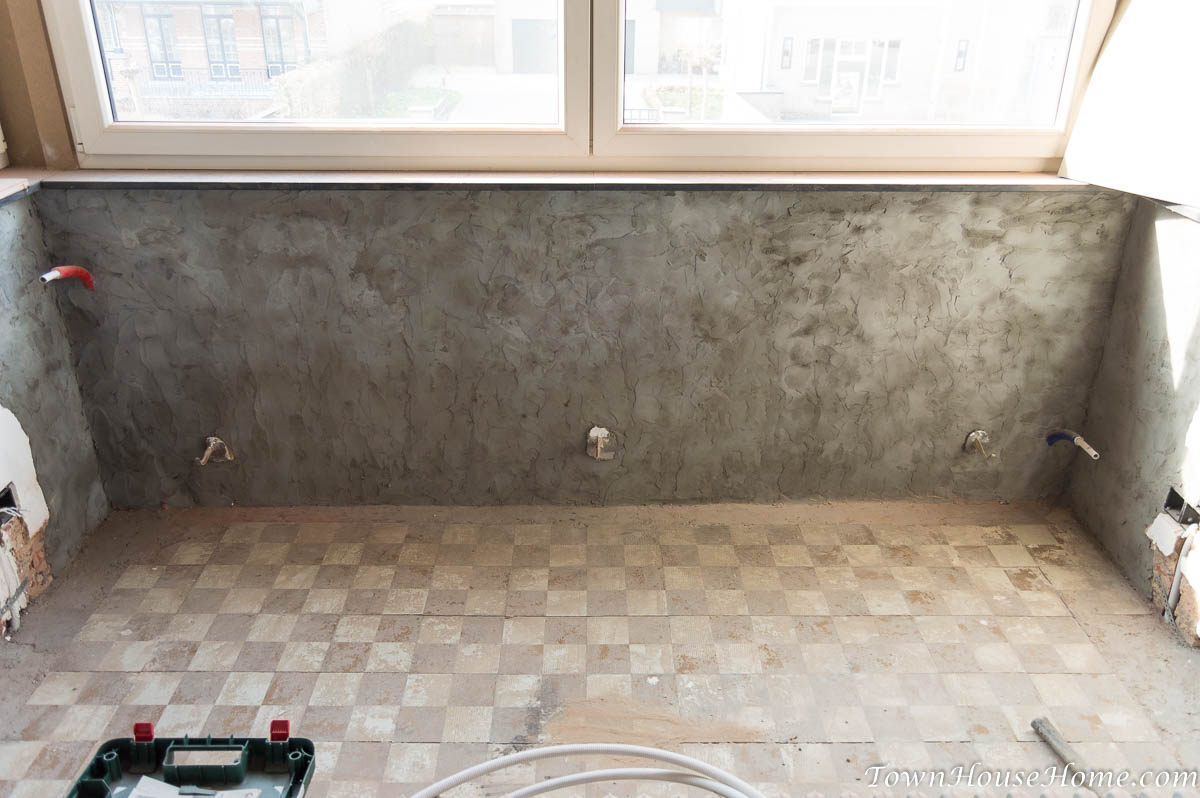 Once that had sufficiently dried out I could finish it off with new plaster, in the same way as before: mix, apply, dry & finish!

Next up: the ceiling…

Hi there! We're Koen & Chrisje, a newly wed couple, slowly transforming our house to our own home! You can read more about us here.