We’re keeping in the electric theme. Pendant lights are going up, but before that, I still needed to add a finishing touch to the ceiling.

Long ago we’d already decided that our ceilings needed medallions where the pendants were coming, in line with the spirit of the house. Since our crown molding is nothing special, we felt that the medallions didn’t need to be anything fancy either. I started in the dining room, where three cables were protruding from the ceiling… 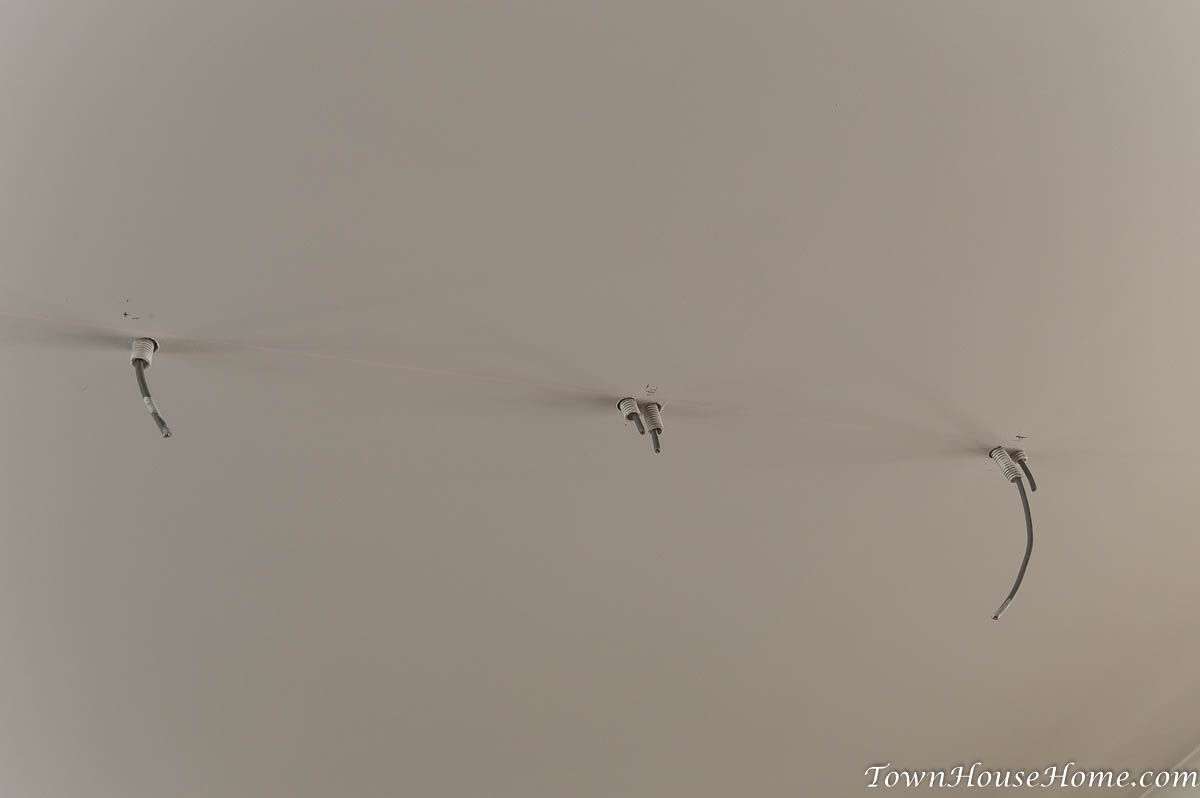 First I measured the diameter of the cup on the wire of the pendant. That way I knew what size hole I could make in the medallion without it being visible. Then I took the largest diameter drill I had and made a hole in it… 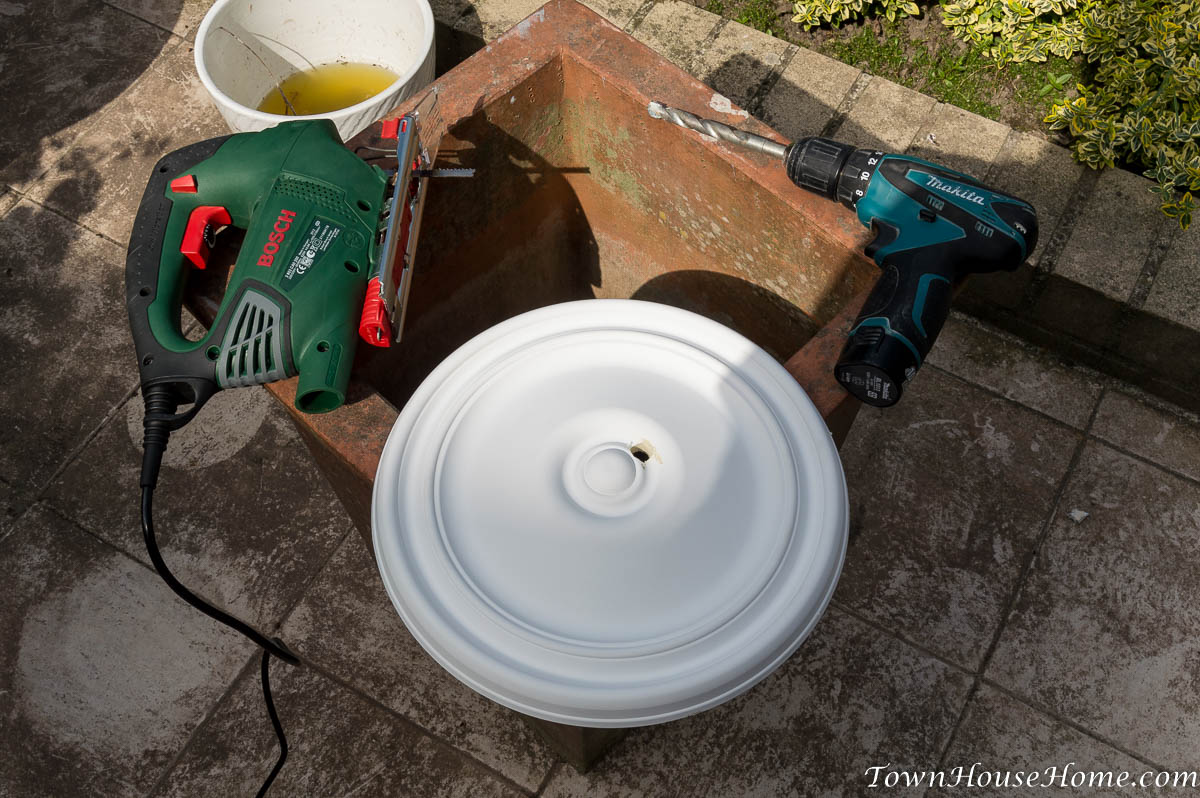 … so I could then cut out the center piece with the jigsaw. They’re made of some kind of styrofoam, so cutting went easy.

Then I glued the medallion in place with the same type of paste we used for the molding, finishing off the seam at the edge at the same time. Wash, rinse and repeat for the other two medallions in the room. Once the paste had dried out, it was only a matter of painting it with the same paint as the ceiling before we could move on. 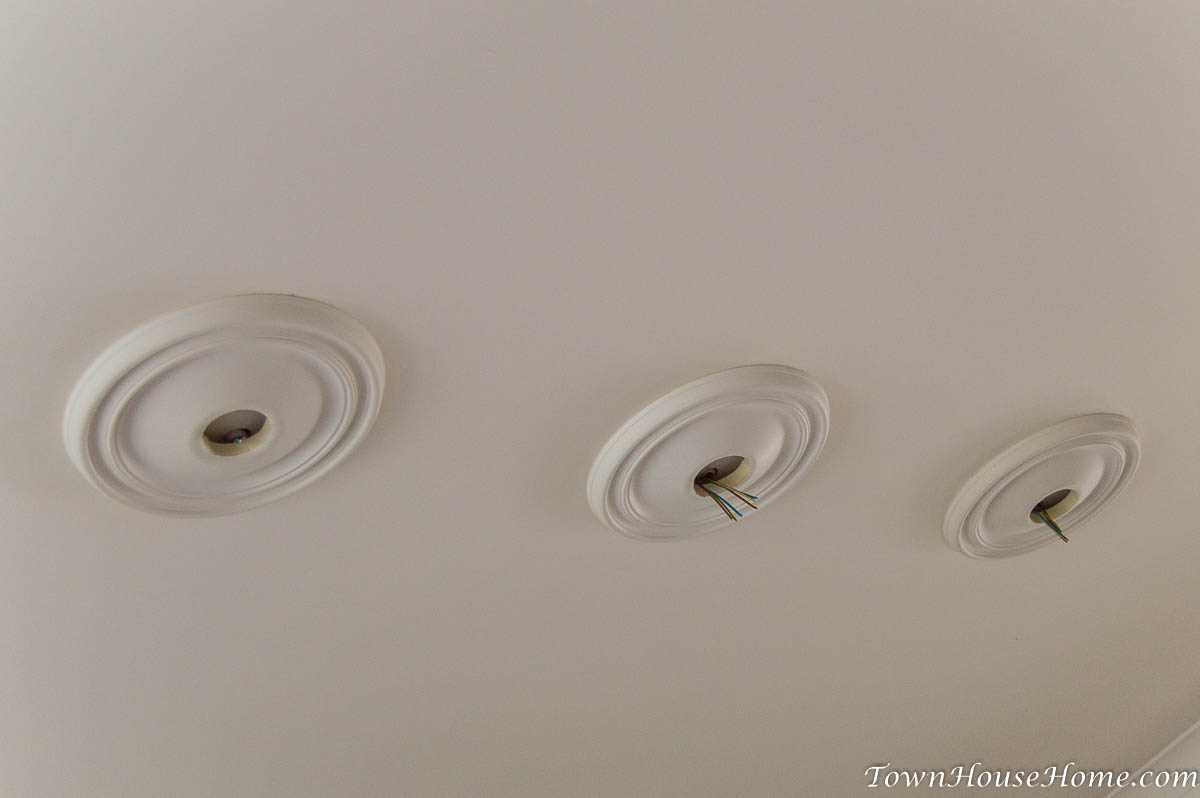 Pro tip: as with the crown molding, for the best result your best option is to install a medallion with the molding before you paint the ceiling. That way the paint looks uniform all the way, unlike some marks you can see at our place now… 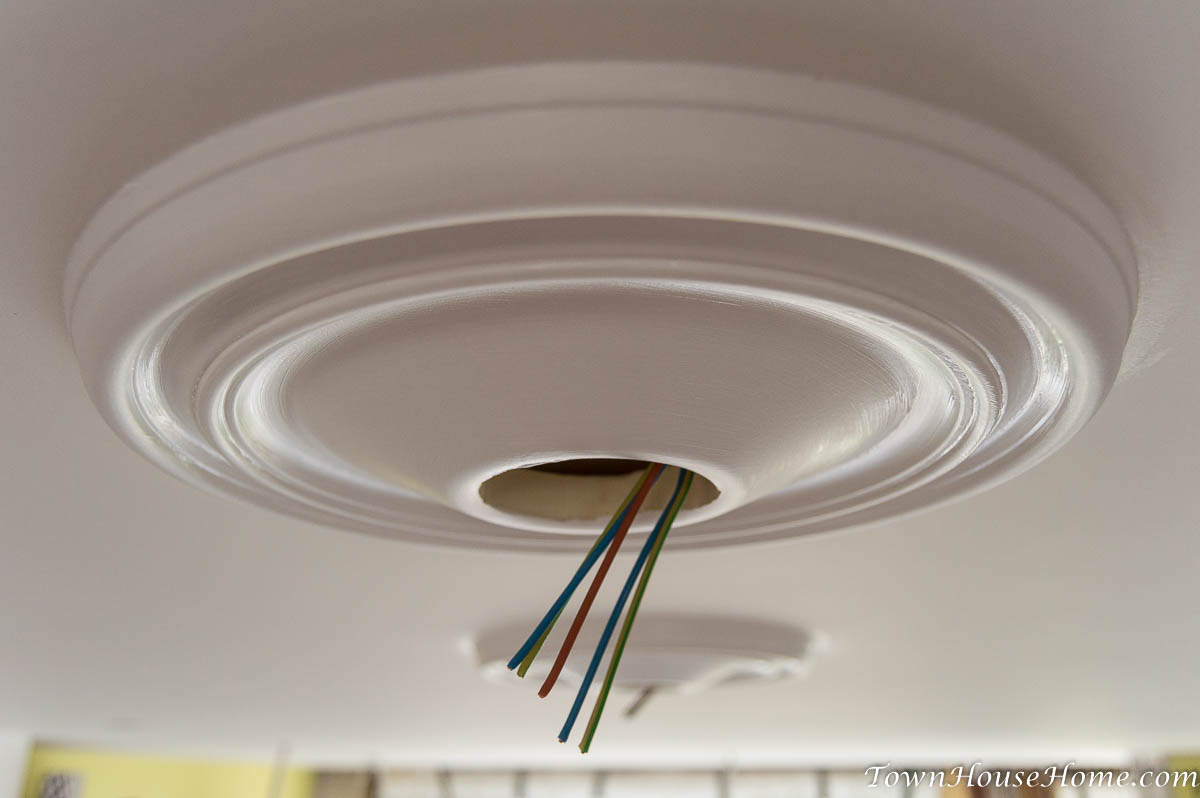 Yeah, I do art-y stuff too!

For the living room we had something special. Remember how I talked about my grandfather who once was a pro painter? Turns out they still had three medallions, tucked away on an attic at my parents’ place. Real gypsum ones.

We could use any of them if we wanted, which we didn’t need to be told twice. The one we saw as a best fit for the living room already had a hole in the middle, so I didn’t need to cut it. I spray-painted it beforehand, as I wasn’t sure any brush strokes wouldn’t still be visible (and I have a spray-paint gun available anyway from the radiators), so I’d only have to do the seam once it was in place. 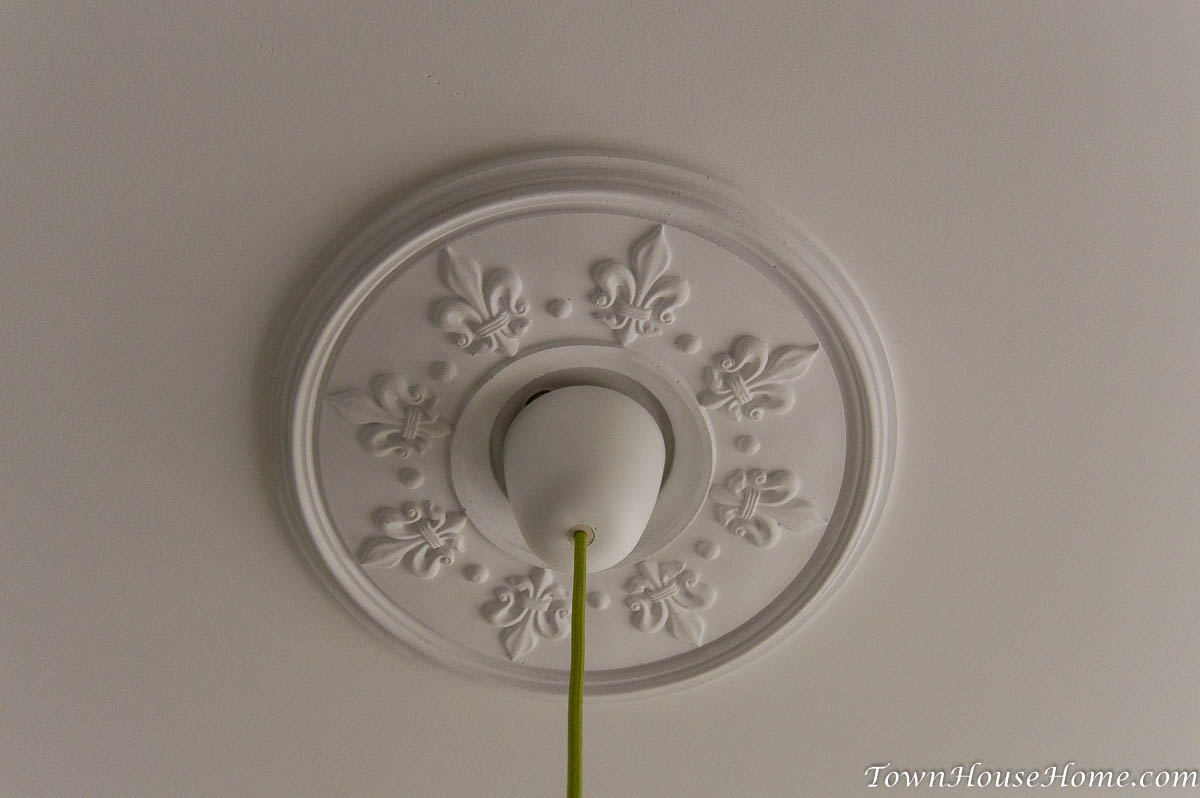 Once the medallions were finished, I could take the next step: hanging up the actual pendants. Again, I started in…

First thing I did was installing three hooks. I had installed some OSB on the frame behind the drywall so I could hang these hooks safely. First I used a small drill in my trusty Makita, just a bit smaller than the core of the hook (without the screw thread): they were not of the self-drilling kind, so I needed a small pilot hole to get them in the OSB while still allowing them to grip firmly. I tugged on them once they were screwed in all the way (I didn’t dare hang on them) and they didn’t seem to budge so hanging a pendant shouldn’t pose a problem. 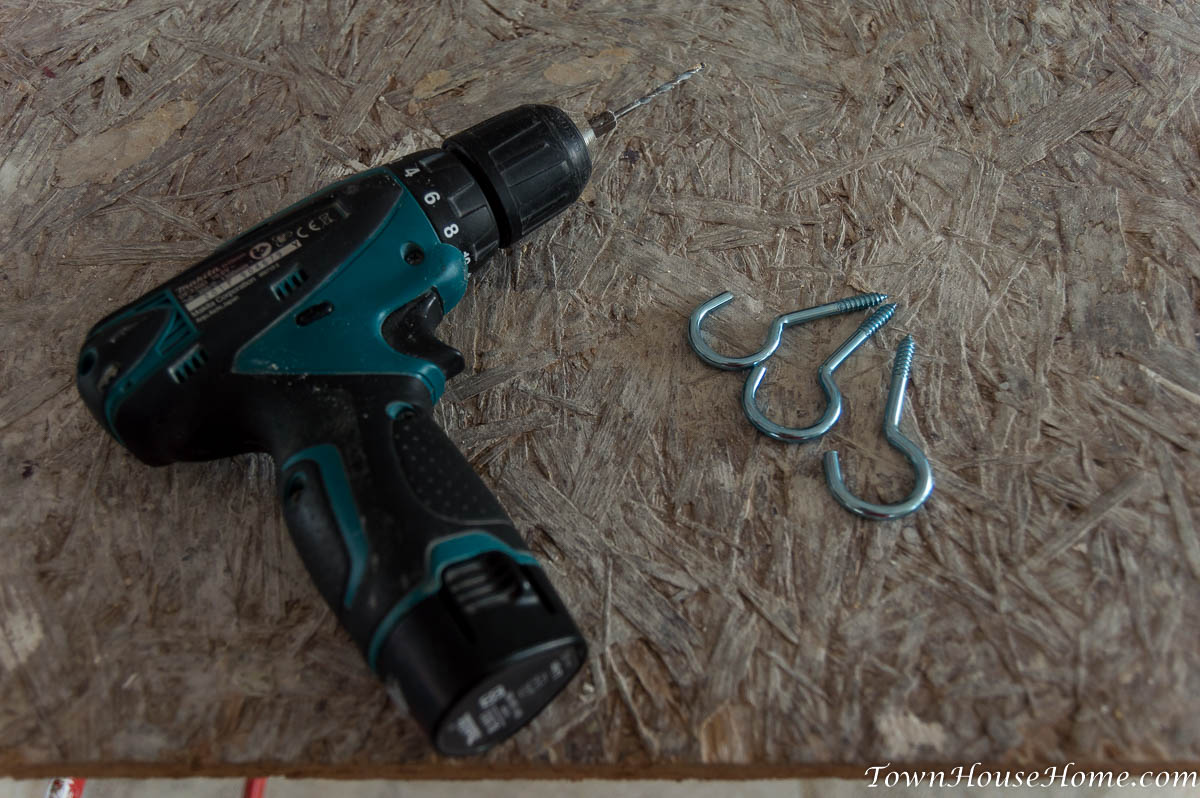 After that I had to turn my attention to the pendants.

We had this idea of three identical pendants, more or less half an egg in shape (you know what I mean, don’t you?). It took us some time, but we finally agreed on something we find at a local hardware store (Brico Plan-It). They had this nice, deep purple, half egg shaped pendant. We ended up with three of those, but they still needed some tinkering with to be ready to go up against our ceiling. 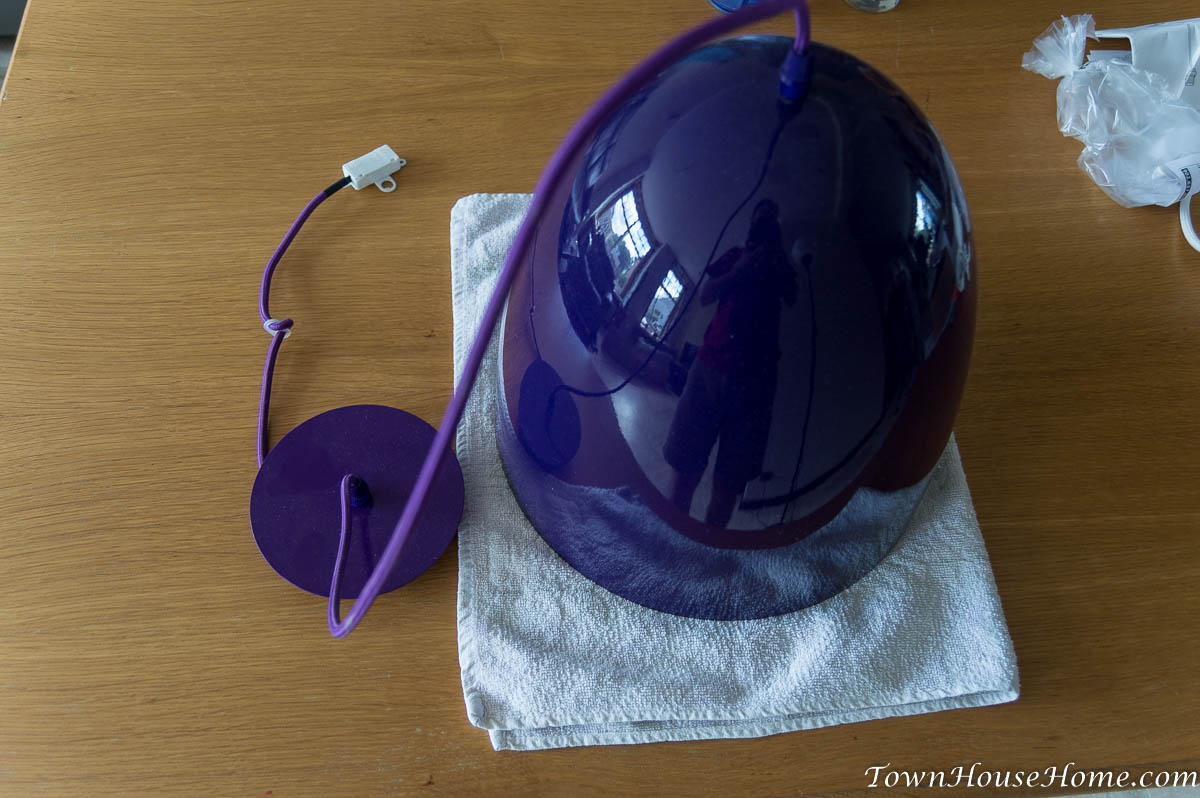 As you might notice in the photo above, they don’t have a nice cap that goes against a medallion and there’s no loop to go over the hook. It’s a different installation system, where you install a metal part against the ceiling with screws, then that purple cap goes over that and holds up the wire of the pendant.

Go to Ikea and buy three white Sekond cord sets (which, in Belgium at least, has a cap and a connector instead of a plug). 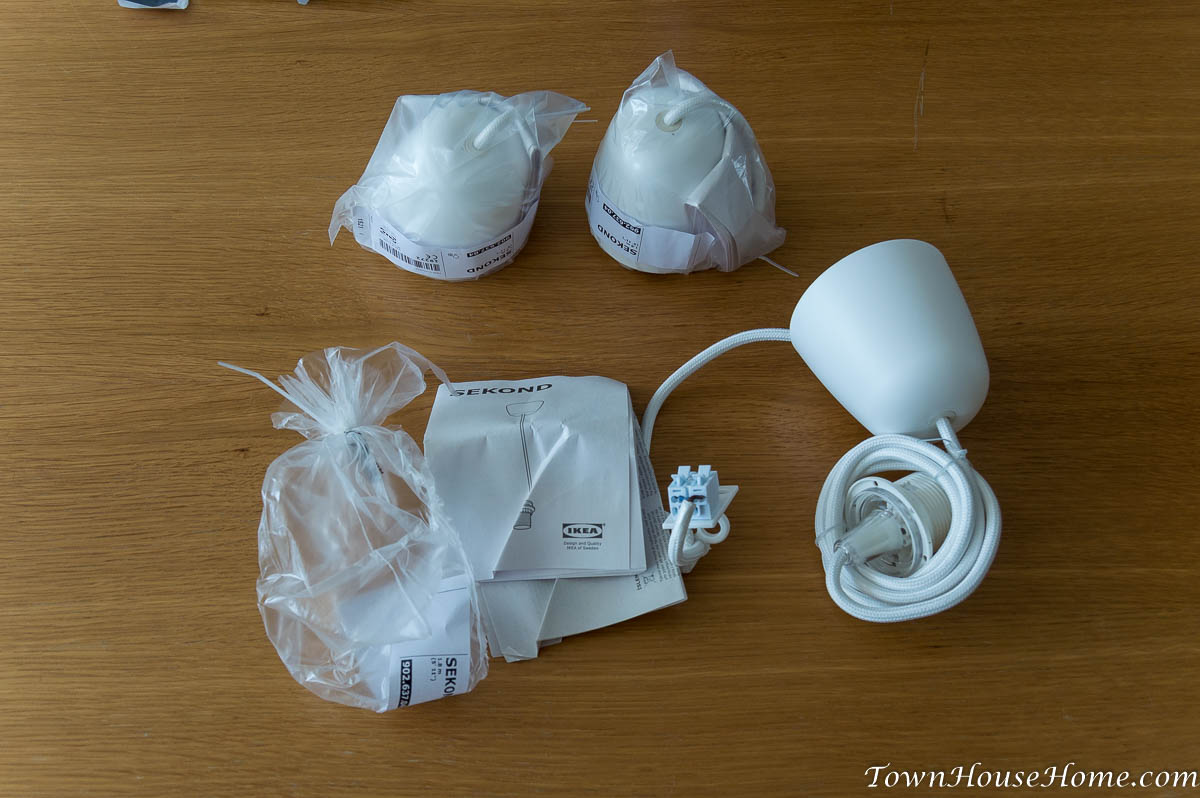 Get the connecting part with the loop and the cap off. Lucky me managed to get one set where the connector had a problem letting go of the wires, so I had to take it apart all the way (opposed to the normal way things should go: press the handle and the wires should come out). If you’d ever need it, here’s how it should go to disassemble completely: lift up the four handles all the way… 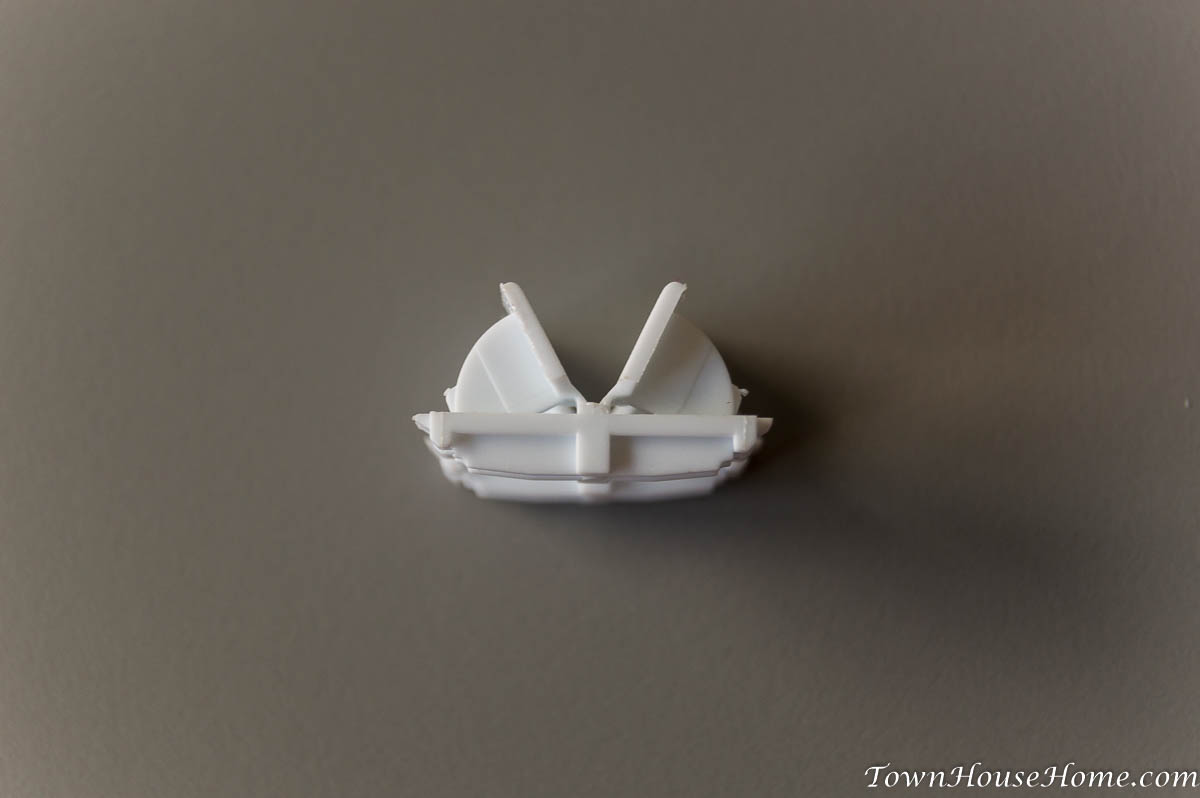 … so that you can take the part containing them off completely, by using a small screw driver. 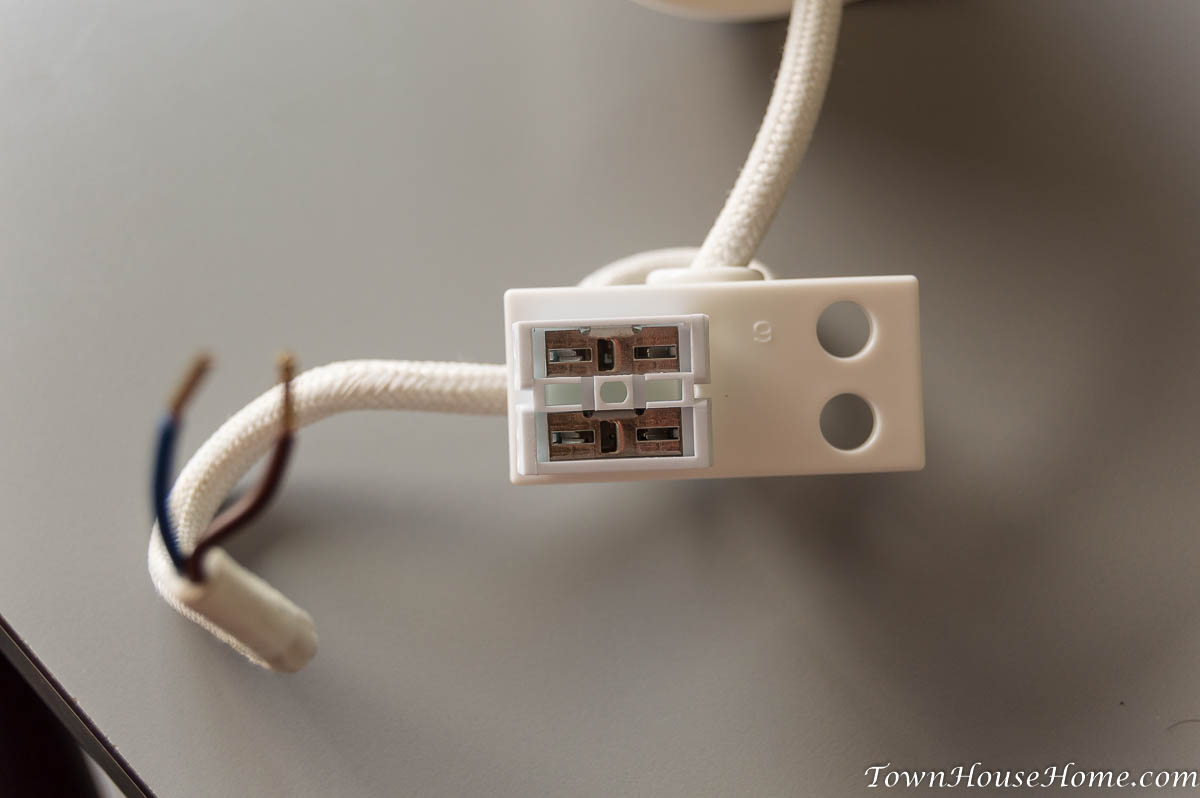 The metal parts should now come out easily. 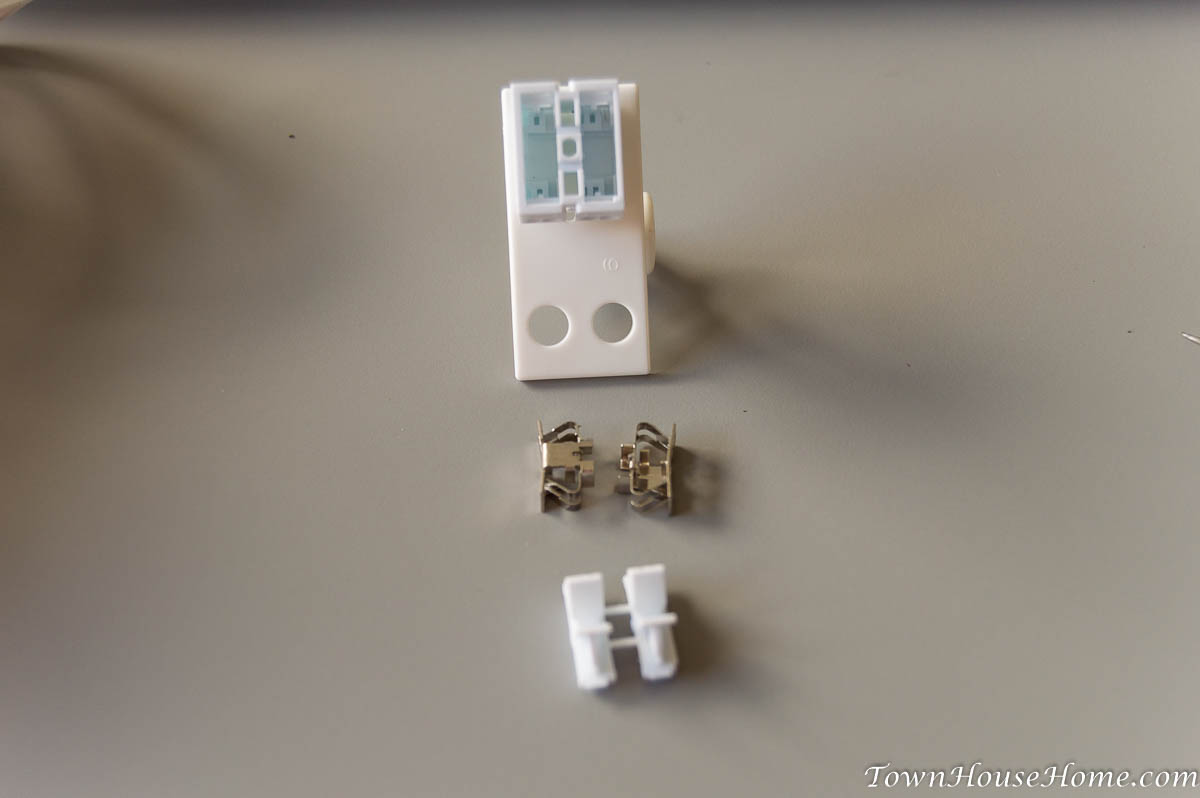 My problem was that the handles didn’t push the metal parts down nicely, hence the wires were still stuck. I tried to bend them a bit so it should be ok now. If not, I’ll just have to open it up again…

Now that you have your correct parts, just take off the corresponding parts on the pendant and make the actual swap. Turns out that the purple wire is slightly smaller than the white one, so the actual cup didn’t stay in place up top… I solved it by simply muffling a tiny piece of white cloth around the wire so it got caught by the rubber in the cap. 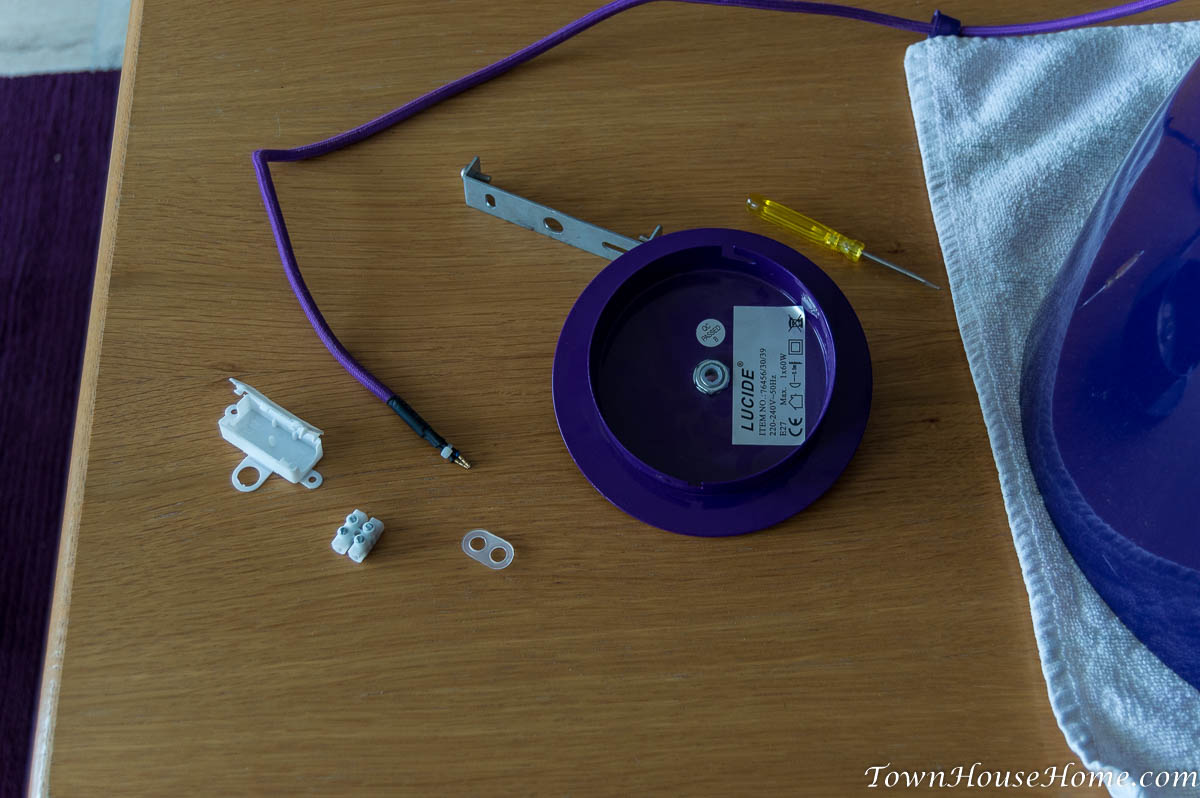 Then I could finally hang them up!

First I made sure the cord was to length. Right now the pendants here are hanging at 165 cm from the ground: this is high enough that (unless you’re exceptionally tall) you rarely bump into one and light up the table nicely while still giving a nice visual.

The final part was the electrical connection. My cabling arrives at the first pendant, goes from there to the second and then to the third. As the connector allows two wires each, this is easy: the arriving blue wire goes together with the departing blue wire in the connector to the blue wire for the pendant (and likewise for the brown wire). Since this pendant doesn’t have a connection for an earth wire, I simply wired them through using a 3-wire Wago clamp (except for the last one of course). 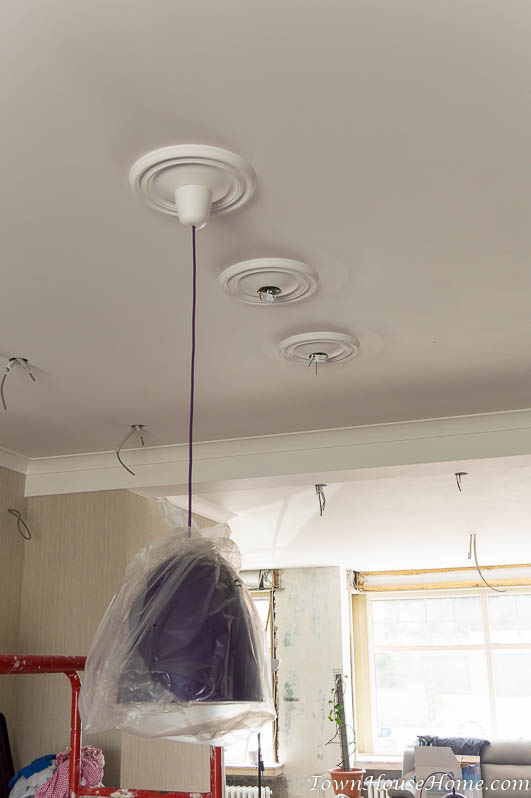 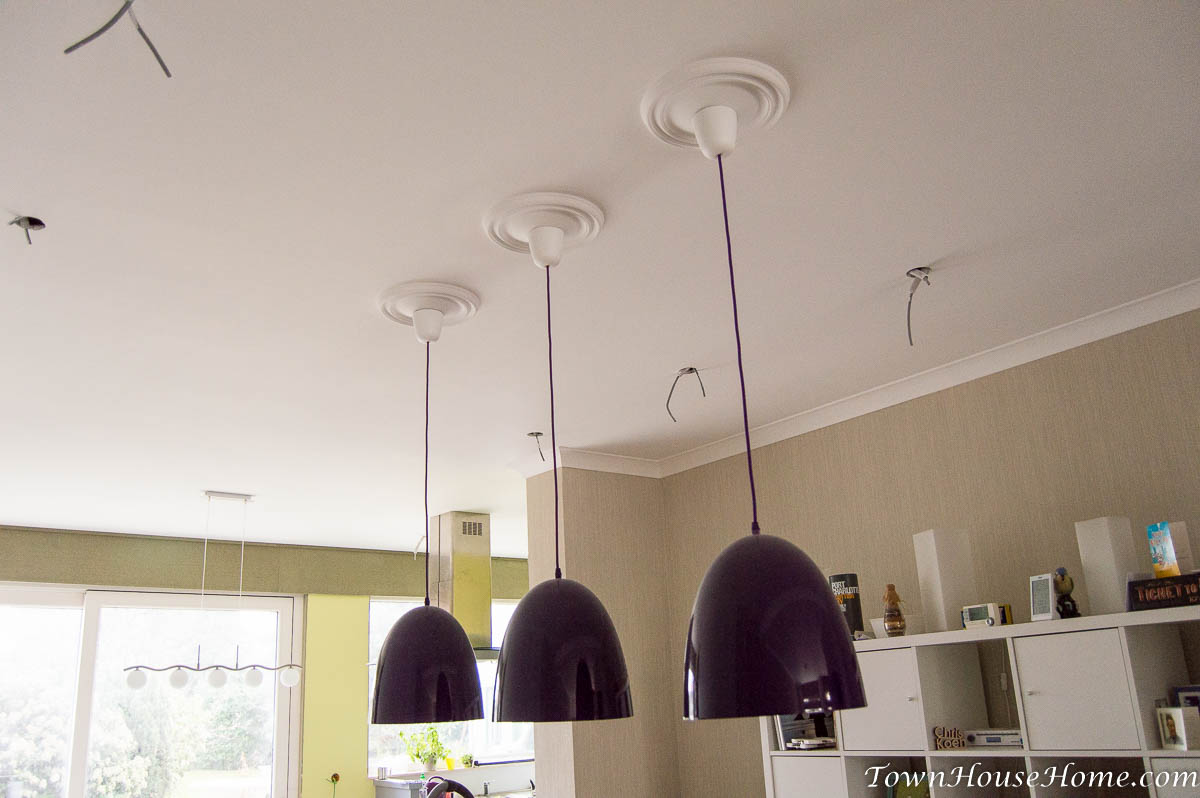 This struggle took us longer. Eventually we settled on another Ikea find: the Överud. Believe it or not, but they also had a green Sekond set, which is practically a match to our wallpaper! 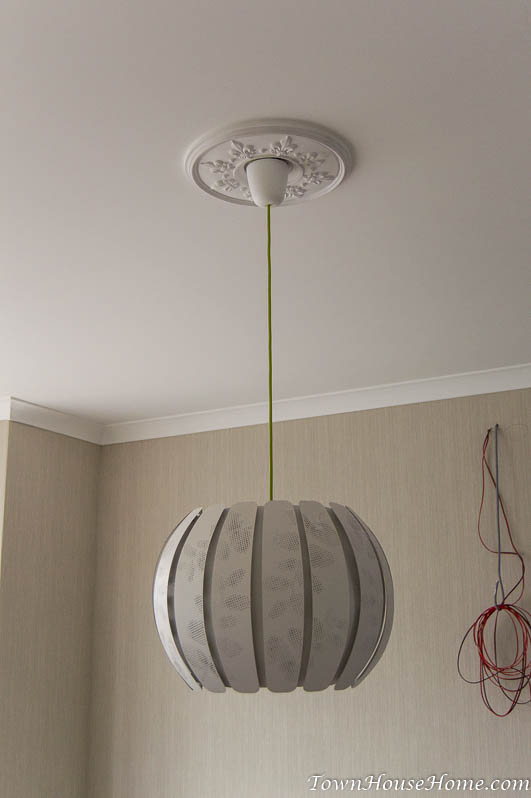 Installation itself was the same as the other pendants: hang it up, adjust the height and connect.

Yes, I still had to hang something in the kitchen as well. This was an installation as the purple pendants were meant to: screw a metal clip against the ceiling, connect the pendant and clip it onto the metal. The hardest part here was finding the middle of the island (which involved some wizardry with my laser level), then it was straight forward. End result: 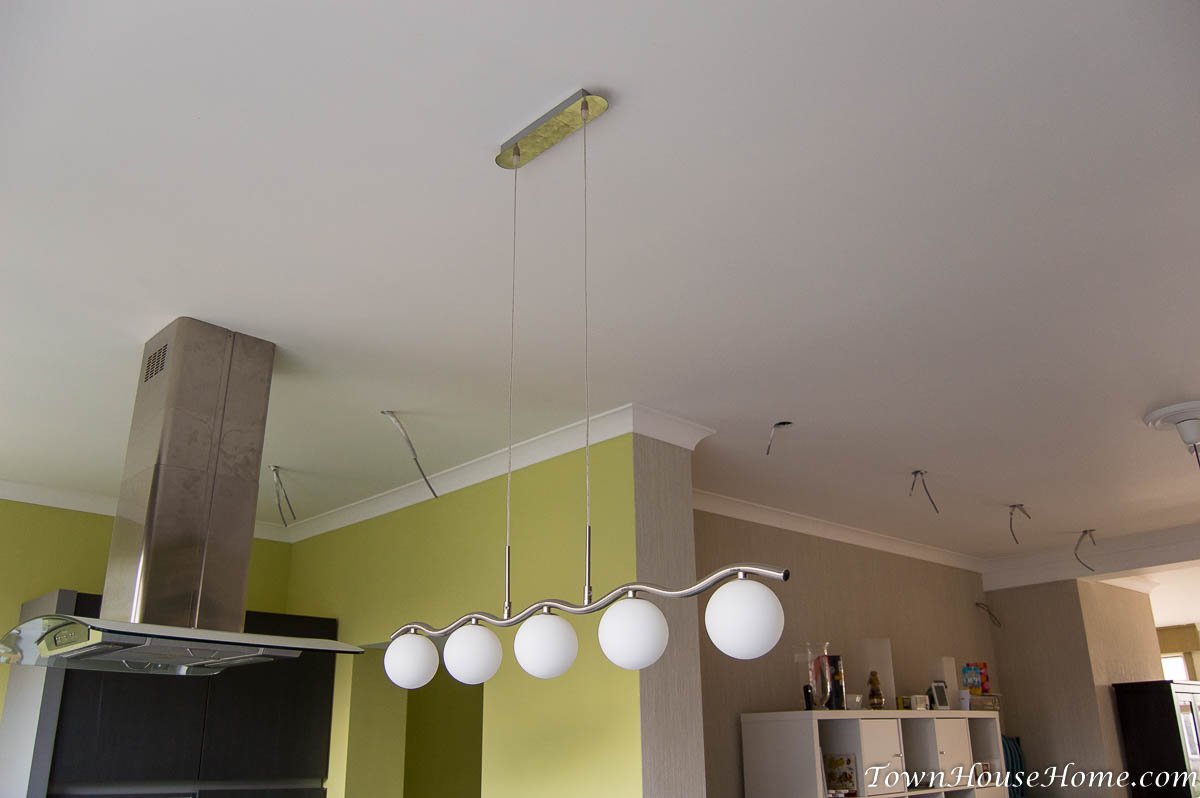 Et voilà, let there be light!